Greg and Rachel Shipp were set to arrive in Mexico in August 2020 with their two young daughters. The family was preparing to work with indigenous language communities in the Southern Mexican town of Oaxaca but those plans had to change when COVID-19 hit the world stage. The Shipps are now working in Maningrida, Northern Territory, with the Australian Society for Indigenous Languages (AuSIL). They share with Wycliffe Today about what they are discovering as they trust in God throughout uncertain times. 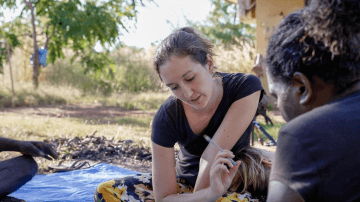 Rachel interviewing a woman in Maningrida during language survey

You were so close to heading to Mexico before the pandemic hit. How did you feel when your plans had to be put on hold?

Both: Like many others around the world, we were disappointed in the disruption. We were just getting into the swing of raising support and promoting our project in Mexico. Suddenly, we were faced with the question of ‘what now?’ Then we spoke with Wycliffe about other possibilities and discovered that AuSIL needed help with language survey work in the Northern Territory.

What are you doing in Maningrida?

Greg: My assignment in Mexico was going to be working in the National Finance Office – a chance to use the maths skills and knowledge from what I’ve studied, in a location where Rachel could use her linguistic skills as well. Mexico seemed like a situation that was specially made for us and our family. But I came to Maningrida without a specific role. That was both a humbling and an unsettling experience. Then one day, I was talking with the finance people at AuSIL. I discovered that they needed help in their finance department so it was a simple decision to join the team.

Rachel: I am currently a Language Survey Worker, assessing different Bible translation needs for communities in the Northern Territory. I will be doing the same role if we end up getting to Mexico, so this is a great training opportunity. I studied Social Research at uni (university) and we were taught specific research steps to go through when interviewing people about their language needs. But I have mainly been getting the research done ‘on the side’, asking people questions in the context of our conversations. The church has been asking for help so I am being led by what they want. It slows the work down but it makes sense – the people are so relational. I had no idea how much translation work there was still to do in Australia! There are 10 languages here in Maningrida alone. So far, I have looked at all 10, narrowed the focus down to two, and then focused on one.

What is your advice for others struggling with a change of plans or circumstances?

Both: God doesn’t care about the specifics. You might feel like ‘the plan’ for your life has been sidetracked but God has everything under control. We had the plan to get to Mexico in 2020 for a number of years and it was looking good until COVID-19 happened. We had to come up with a ‘Plan B’ but having been in Maningrida for a while now, we have come to see how God is using this time to prepare us. His plan is always better!