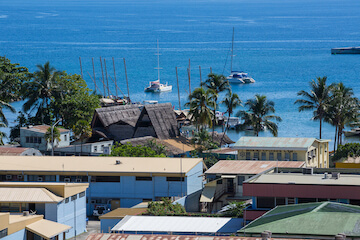 Restrictions on overseas travel during the pandemic have led to an unexpected blessing. The Bilua Bible translation project in the Solomon Islands conducted a virtual check with international consultants—whom they could not have afforded to bring onsite for face-to-face work.

Over the past two years, the Wycliffe Global Alliance Asia-Pacific Area Leadership Team conducted a study to find out how many translation projects in the region needed consultant checks, and to know the workloads of existing consultants. This survey was part of efforts to encourage greater sharing of consultant resources among Alliance organisations in Asia-Pacific. The idea is to enable organisations with more consultant resources to assist translation projects that need them.

Changes brought about by the Pandemic

When the pandemic unfolded, the Old Testament translation team for the Bilua people in the Solomon Islands looked for a consultancy solution to keep the work progressing. The Alliance’s Asia-Pacific leadership team suggested they try a new model, and invite different entities from the Asia-Pacific area to participate in community checks for the Bilua Old Testament (Kings). The three consultants who participated in the project were from Australia, Singapore and Taiwan. The Australian translation consultant, Debbie Conwell, who has been serving long-term in the Solomon Islands, acted as the cross-cultural bridge, linking the Bilua team with external consultants. The Singaporean resource consultant “Shan” (pseudonym) was the adviser. And the Taiwanese translation consultant was me, Grace Chou, who oversaw the Bilua Old Testament consultant check. The Bilua translation team included translator Jonah Onama and a pastor. 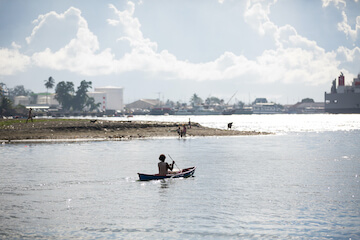 A boy paddles in a canoe in the river that runs through Honiara of the Solomon Islands. Photo: Elyse Patten

The Bilua population numbers about 5,000. A few decades ago, Wycliffe Bible Translators translated the New Testament into Bilua. Subsequently, the Bilua church appointed some translators for the Old Testament. Five years ago, the first translator died, and his younger brother, Jonah, continued the work. The translation of the Bilua Old Testament has in fact been drafted. However, it has not been published due to the lack of funding for consultant checks. Unexpectedly, the pandemic has made online consultant checking both possible and acceptable, and the lower costs have allowed publication plans to move forward.

Historically, Bible translation groups in the Solomon Islands have relied on financial support and resources from international organisations. Debbie pointed out that Bible translation efforts in the Solomon Islands are led by the local church. However, because they are short of funds, being able to complete and publish their translation is quite a surprise. As a result, she is overwhelmed with thanksgiving whenever she mentions how the pandemic ironically enabled the completed drafts to be consultant checked. 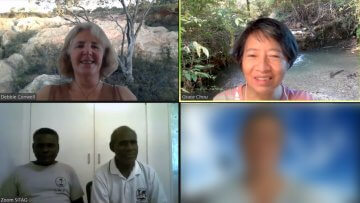 (Clockwise from left top corner) Debbie Conwell, Grace Chou, Jonah Onama (right) and the pastor, and Shan work together in a checking session over Zoom.

The islands where the Bilua people live have no electricity or internet access. Jonah and an assisting pastor have to take a two-day boat ride to the translation office in the Solomons capital, Honiara, in order to log on for online consultant checks. There was some concern about two Bilua people, new to online meetings, carrying out checks with consultants they were unfamiliar with. However, with much prayer, and regular interactions with the consultants, the Bilua team members have grown increasingly comfortable expressing their views, allowing the consultant checks to progress smoothly.

Although the team was checking the Bilua text, the languages used for communication among team members are English and Pidgin, the vernacular language used in the Solomon Islands. I cannot understand Pidgin and had to rely on Debbie for translation. However, I have since learnt a phrase in Pidgin! The computer used by the Bilua team members would often enter sleep mode, which meant that we were then unable to see them on the video. Each time this occurred, Debbie would say mifala no lookim yu, meaning “we are unable to see you”. Jonah would then activate his computer so that we could see them. After having heard this phrase over a few days, one day when their computer again entered sleep mode, I said “mifala no lookim yu”. I had barely completed the phrase when laughter could be heard coming from the Bilua team members, and soon enough they could be seen. I suppose my pronunciation was not too accurate, and they found it funny.

Learning through the Process 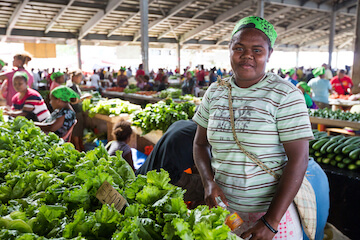 Shan, the consultant from Singapore, has decades of experience carrying out Bible translation consultation checks. The outcome of the Bilua consultant check would definitely be much better with her handling it. However, to give me opportunity for growth, she allowed me to try and gave me much encouragement and guidance along the way. Before we had started the consultant checks, I was anxious and worried that I would mess up. Shan told me, “Do not worry! God will watch over His own Word.” Indeed, I often felt the Holy Spirit open our eyes and lead us to take note of important points that needed changes through the whole process of checking. At the same time, Shan often reminded me, “Even though I have a few decades of consultation experience, I approach each consultant check with fear and trembling, because we are handling God’s Word. I think the right approach is humble reliance on God.”

The consultant check for the Bilua translation of Kings is but a small step in the Alliance’s plans for translation checks. Doing checks online significantly reduces the cost and allows participation by more consultants in more locations—thereby raising the standards of the checks. Based on the experience with the Bilua translation, the Asia-Pacific Language Service Programme Department has put in place some guiding principles and policies to help future cooperation efforts in consultant checks in the Asia-Pacific region. 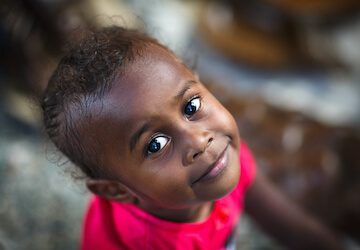 A young boy of the Solomon Islands. Photo: Marc Ewell

Although the Bilua Old Testament translation has long been drafted, only 5 percent of the material has been consultant checked thus far. The Alliance organisations that participated in this round of cooperation are happy to continue helping with the Bilua translation, though the project still needs the participation of many consultants. We hope the consultant check for the Bilua Old Testament translation can be completed in the next few years so that it can be officially published.

Countries in the Asia-Pacific, such as the Solomon Islands, India and Indonesia, still have many completed drafts of Old and New Testament translations awaiting consultant checks. The Alliance looks forward to more such cooperative efforts in getting Bible translations published so that they can be used in the local churches.