In 2017, the Biblical Missionary Association (or Wycliffe Poland) began working with the Roma people in an eastern Slovakian village called Bezovce. Here, as in much of Europe, the Roma people live in slums, often shunned by their larger communities — even though they have been here for centuries. A local Slovak church even posted a sign on its door: Not for Roma.

Three years later, life in this village looks different because many Roma people opened their hearts to Jesus. Let me tell you the amazing story of how God made this happen.

For the past 20 years, Wycliffe Poland has ministered to the Roma people in Ukraine. They lived in great poverty that I had not seen anywhere else. So we helped organise education and schools for Roma children there.

From our Wycliffe location in southern Poland, the shortest route to Ukraine passes through Slovakia — which also has a large Roma population. For many years, we were not interested in working among the Roma people in Slovakia. For one, we did not have the resources. Also, we thought that because Slovakia belongs to the European Union, the Roma living conditions would be much better. We were very wrong.

In 2017, a pastor from the Pentecostal church in the city where I live asked me if I knew a church that could use benches for 300 people. Their church was removing the pews and replacing them with chairs. I knew a pastor of the Roma church in Sabinov, Slovakia, so I directed the question to him.

He replied that yes, they were building prayer houses in two villages and needed benches — 200 in one location and 100 in the other. One was the village of Pavlovce. Soon we went there to meet the pastor of this congregation. He took us to the neighboring village of Bezovce, where he wanted to start a ministry. 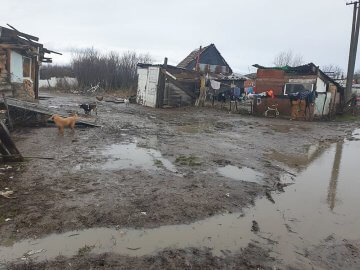 I was shocked. I had seen poverty in Roma villages in Ukraine, but what I saw in Bezovce was even worse. About a dozen Roma families lived here. Some had up to nine children. Their houses that looked more like sheds, without running water or toilets. For electricity, they connected illegally, and dangerously, to a power line running through the village. At night, fathers and mothers would take turns: One would sleep while the other made sure rats did not bite their sleeping children.

Although humanitarian aid is not one of the main aspects of the Biblical Missionary ministry, I knew we could not leave these people. We needed to help them. And so it began. 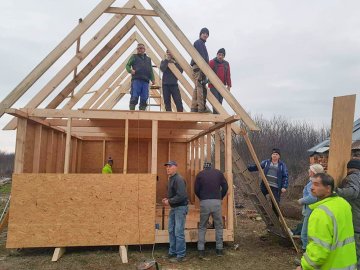 We started by bringing clothes, food, discarded old-style washing machines, children’s toys and bicycles. When we published photos showing the Roma people’s living conditions, reactions in Poland varied. Some thought such people should not be helped, because this would only perpetuate poverty. Others felt we should do everything in our power to help them out of both physical and spiritual mud.

Thanks to the funds provided by the latter group, we were able to build houses for six families in Bezovce. Today we have funds to build more.

As we showed the Roma people help, kindness and respect, they opened to the gospel. During an outdoor evangelistic gathering, about a dozen people responded to the call and chose to follow Jesus. Today, almost the entire Roma village regularly travels 12 km to attend weekly worship services in Pavlovce. The Apostolic church there is mostly Roma. One of the men from Bezovce takes people there in his car, making two or three round trips. Others take a local bus. People also meet in the Bezovce during the week to pray and read the Bible together. 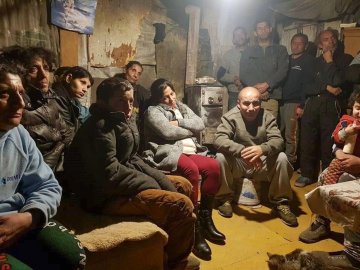 An evangelistic meeting in Bezovce, Slovakia

The Roma people here still struggle … but many of their lives have undergone great transformation:

During the height of the pandemic, I asked how the people were spending their time. One person replied: “We cannot leave the village. We sit at home and read the Bible.”

Though many Roma speak Slovak fluently, they now have the New Testament in their Romani heart language, Bergitka. The translation was finished in 2014 by a team of Roma men in cooperation with The Word for the World. In 2019, they issued the New Testament in a bilingual, Roma-Slovak version. Today the team is translating the Old Testament.

A Work of God 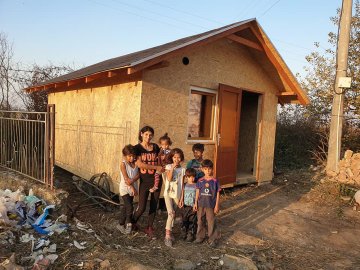 No one had ever preached the gospel to the Roma people of Bezovce. The purpose of our ministry from the very beginning was to introduce them to Jesus Christ and encourage them to use the Bible. And it happened. Seeing their poverty, we did not leave them in need, and God did in their hearts much more than we could have thought.

Our commitment to this ministry also has meant that some churches in Poland, which until now were not interested in supporting missionary work, began to support our service among the Roma.

May God continue to transform lives and bring fruit for his glory.