Home What We Do Papers and Articles Reflection on Vision 2025

Editor’s note: Albert Fung, the Executive Director of Wycliffe Taiwan, reflects on the impacts of Vision 2025 for the Bible translation movement, and especially on the ongoing journey of the Wycliffe Global Alliance.

In less than four years, the “due date” of Vision 2025 will arrive. Wycliffe Taiwan has been taking part in this epic Bible translation movement since its inception in 1995. As we embrace the future of post Vision 2025, let us assess the changes and impacts brought on by this Vision so that we could inherit the past and move forward.

The Adoption of Vision 2025

In June 1999, the delegates adopted a resolution called Vision 2025 at SIL International Conference and Wycliffe International Convention (a.k.a. ICON 1999). Since then, it became well known among us, primarily in the form of this summary of the multiple-page document:

Motivated by the pressing need for all peoples to have access to the Word of God in a language that speaks to their hearts, and reaffirming our historic values and our trust in God to accomplish the impossible, we embrace the vision that by the year 2025 a Bible translation project will be in progress for every people group that needs it. We acknowledge that this cannot be accomplished simply by our working harder or doing more of what we are now doing. It will require us to make significant changes in our attitudes and ways of working… to this end we commit ourselves to pray for the fulfillment of this vision, seeking God’s guidance and obeying Him in whatever new directions He may lead. (WBTI 1999:5)

The Vision 2025 document touches on at least nine missiological implications:

(1) an awareness of the ‘pressing need’ that still exists for Bible translation; (2) the adoption of a date as a means of motivating action; (3) a realization that working harder is not what is required; (4) an acceptance that different attitudes and approaches are needed; (5) a focus on building capacity and sustainability; (6) a greater emphasis on partnering internally and externally; (7) an openness to new ways of working; (8) a recommitment to accomplishing the task; and (9) an intentional desire to be led by the Holy Spirit. (WBTI 1999:5)

Vision 2025 remained in the minds of the Wycliffe International leaders as they considered the future of Bible translation. With the Vision 2025 concepts and the changing world contexts in mind, Wycliffe International eventually undertook some bold changes which led to restructuring as the Wycliffe Global Alliance). More and more organizations were joining the Alliance because they were engaged in the global Bible translation movement. They came without the Wycliffe background. Some were familiar with Vision 2025, others were not. The Alliance’s first executive director, Kirk Franklin, and the leadership team were sensitive to the diversity and varying contexts of Alliance organizations. They sought to pursue many of the values expressed in the Vision statement above, but did not pressure organizations one way or the other in terms of using the Vision for promotional purposes either internally or with their constituencies. But the restructure of the Alliance facilitated changes that were represented in the Vision:

1. All Streams Flow into the Sea

The Alliance realized that strengthening partnership and collaboration both inside and outside the Alliance had become imperative. This was not just as a means to an end, but as a reflection of God’s desire for His people to serve in community. The leadership recognized that most organizations contributed to the Bible translation movement in one or more distinct ways. They identified Seven Streams of Participation and the related indicators. Organizations did not have to “do it all” but were encouraged to work together. Any organisation that contributed to the worldwide Bible translation movement in one or multiple streams had potential for joining the Alliance: These streams are (1) Church, (2) Prayer, (3) Fund­ing, (4) People, (5) Specialty Services, (6) Training in Bible Translation Roles, and (7) Bible Translation Programmes. With these participation streams, the number of Alliance organisations surpassed 100 in 2011, whereas the figure was less than 40 in 1999.

Before the restructuring, Wycliffe International had numerous identities for its organisations: Some were voting members, others were observers without voting rights, and still others were working with Wycliffe on translation projects yet were not members. The identities of these organisations were based on their category, which also defined each of their rights and responsibilities.

From 1942, when Wycliffe started in the USA, until it grew and expanded into an international body of organisations, it had a hierarchical structure like almost all other organizations of this time period. But keeping in mind the Vision 2025 willingness to work differently and to pursue new directions, the Alliance, including the leadership of the long-time voting member organisations, had the boldness to move away from the hierarchical structure. Under the Alliance’s new structure, all organisations — no matter how old or new, big or small, have voice and influence. Each organisation is required to sign the covenant with the Alliance, and have the same rights and responsibilities. Polycentrism and polyphony have become major values and a part of the Alliance’s everyday functions.

3. A Shift from the West to the South and the East

If one defines 1999 as a watershed because Wycliffe adopted Vision 2025 in that year, then before 1999 it could have been viewed primarily as a Western mission agency — strong Western emphasis on central administration, structure and leadership, and English was the lingua franca even though there were a number of non-Western organisations. When it evolved into the Alliance in 2011, the make-up of its members had undertaken a significant change, and the number of organisations had also grown to over 100. Among these organisations, 70% were from the global South and East, and leaders were from Asia, Latin America, Africa and the Pacific. French, Spanish, Chinese, Portuguese and Indonesian were added to English as communicating languages. 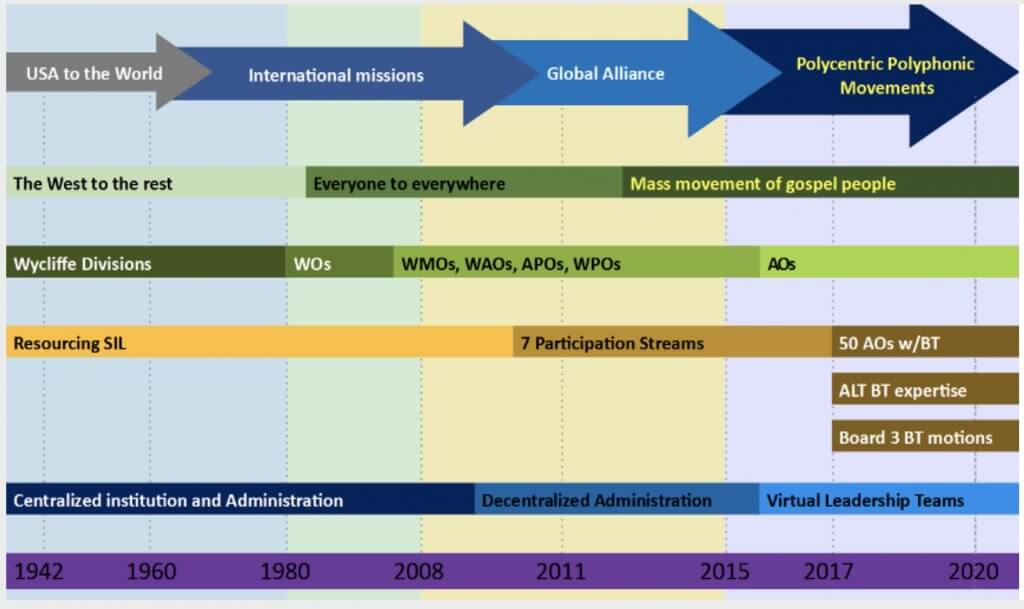 We are in 2021 now. In less than four years, will the vision that “a Bible translation project will be in progress for every people group that needs it” be fulfilled? How has Vision 2025 impacted the speed of Bible translation? Those who have been praying and supporting our work diligently want to know the answers. Although we still have a few more years to go, we can be certain the answer to the first question is ‘no’. For the second question, let us get an insight from some data.

As the churches in many traditional “mission fields” grow, mature and take up the vision and mission of Bible translation, and as they are now deeply involved in the actual work, there is a need to develop new training models. In the past, before sending its personnel to the assigned projects, Wycliffe organisations would require them to train in linguistics, phonetics, orthography, grammar analysis, etc. This was to prepare them to start from scratch in a language they did not know and among people who were, quite possibly, monolingual. Though training remains vital for cross-culture and language work, more and more projects are now in the hands of local people who are often fluent in several languages, including a language of wider communication. But there remains a need for experienced translators and consultants who can train others. The Alliance’s Asia-Pacific Area held the “Language and Translation in the Mission of God” course, a new translation training still in its experimental phase. The Area Consultant Taskforce is another initiative to train translation workers in the Asia-Pacific Area.

Vision 2025 will soon become history. While some people say it is unlikely to be achieved , it has undoubtedly brought in theological reflection on mission and triggered paradigm shifts in the Bible translation movement. Vision 2025, a prescriptive declaration, signified a time when Western influence on mission leadership and strategy was at its peak. As Wycliffe became an alliance and more organisations participated, and with the rise of mission leaders from around the world, another new vision with prescriptive declaration like Vision 2025 is unlikely to come out. Yet at the same time, we will be seeing a Bible translation movement which is more polycentric and polyphonic.