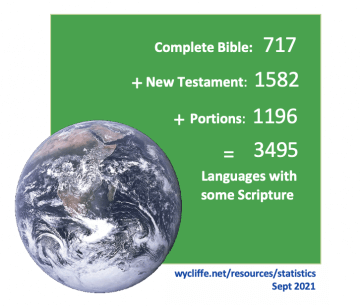 7378 total languages in the world

No Scripture, but not in need of translation:

1.51 billion people, speaking 6661 languages, do not have a full Bible in their first language.

For more information about why this number has changed significantly from last year, see 2021 Scripture Access Statistics Q&A.

Scripture access statistics are not as simple as they seem at first glance. We strive to give an accurate snapshot of the main numbers, but the data is actually a bit more complex than that. For example, translation need is not as simple as determining which languages do or do not have Scripture. Most of the languages with only “some Scripture” are in need of more, and even full Bibles undergo revisions from time to time. Also, com­par­isons with pre­vi­ous an­nual re­ports are chal­leng­ing and some­times not pos­si­ble, due to on­go­ing changes and im­prove­ments in data de­f­i­n­i­tions and col­lect­ing meth­ods.

These are just a few examples of measurements being talked about. To read more, see: A missiology of progress: Assessing advancement in the Bible translation movement by Dr. Kirk Franklin.

Wycliffe Global Alliance presentations of Scripture Access Statistics are compiled from data provided through ProgressBible by Alliance Organisations, SIL International, United Bible Societies and many other partners. Data is current as of 1 September 2021. Population data is based on available information about first language speakers in SIL’s Ethnologue.

Further stories about people and projects are available at www.wycliffe.net and from your nearest Alliance organisation.