First in a series of reports about how Alliance organisations in countries bordering Ukraine are impacted by and responding to the crisis.

Wycliffe Hungary has just three employees in its Budapest office, with its members scattered around the world. But as tragedy continues to unfold in neighboring Ukraine, they know their long-term role could soon include new responsibilities.

Hungary shares 135 km of border with Ukraine. Some 150,000 ethnic Hungarians live in the western Ukrainian region of Zakarpatska. At last count, nearly 4,000 people — Ukrainians and ethnic Hungarians — have been arriving daily at five crossing points into Hungary. 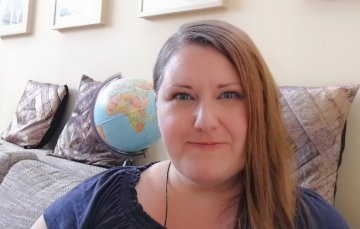 “Hungarians are living in Ukraine, but there is not necessarily a great connection between Ukrainians and Hungarians,” says Wycliffe Hungary Director Zsuzsa Zentai. “This is a great thing now that we can receive Ukrainians, and they are amazed by the help and the love they receive when they get through the border. Now we can learn how to love others, love foreigners much more.”

Humanitarian aid workers are everywhere, Zsuzsa says — at the border and at train stations to distribute food, clothing and supplies. Wycliffe Hungary is collaborating with Faith Comes By Hearing to help people arriving in Hungary to find the Bible app in their language, whether it is Ukrainian, Russian or Hungarian.

“We actually developed a little card, with a Bible verse and a blessing on one side and the QR code for the Bible app on the other side, and it can be distributed easily,” Zsuzsa says. “We are going to print thousands of them and give them to different organisations and churches and whoever wants to distribute them.”

Wycliffe Hungary also is helping international students with connections to the Alliance. Last week, Zsuzsa received a message from a member of an Africa Alliance organisation. His daughter ended up in Budapest after fleeing Ukraine, and needed a place to stay.

“It is such a joy that we were able to find a place for her and her friend,” Zsuzsa says. “Another sign of God’s provision in chaotic times.”

Meantime, Wycliffe Hungary members looking for more ways to partner with local churches and aid organisations in the coming weeks and months — even if they can’t go to the border right now.

“As a small organisation, this is really our desire to be there and help,” Zsuzsa says. “But we have to keep up with everyday work as well. We have new members applying right now. It’s kind of a parallel world as we try to respond to the situation. My coworkers are also overwhelmed with work. So it is really hard, because you want to go. But later on, what is a small organisation’s role in that whole story?”

“Pray for wisdom, how to respond well,” Zsuzsa says. “Right now the help is so great and everybody is giving. But later on, pray that we keep up with the help and can use this kairos moment, and see what our part is, how God wants to use us.”

She adds: “I just got a call from one of the leaders of a Christian school, and she shared that there might be a need for teachers who can teach Hungarian for the refugees. So that might be a possibility for us to serve, to collect those kinds of teachers.”