Slovakia shares 60 miles of border with Ukraine, meaning it has been the first stop for more than 200,000 refugees since the Russian invasion. As the first wave of refugees has moved through, a second wave is arriving … with little idea where to go next.

This includes thousands of Ukrainian Roma people who are finding help from eastern Slovakia’s large Roma population. Once only on the receiving end of humanitarian aid, now Roma churches in Slovakia are enthusiastically providing help to others — including introducing them to newly translated Scripture in a language close to their own. 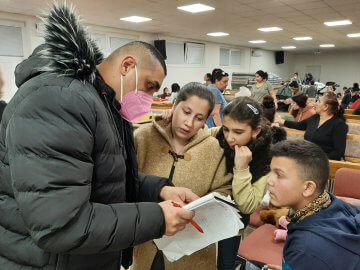 The Roma have been in eastern Europe for more than 1,000 years, but they have been a population marked by poverty and dependence, and marginalized by racism. Now, as Ukrainian Roma people have fled the war and reached the border, neighbouring countries have often turned them away if they don’t have someone meeting them there. That leaves families outside in the late-winter cold, with nowhere to go.

Marek Olah is part of The Word For The World, translating the Bible into the East Slovak (Carpathian) Romani language. He is also a pastor at a Roma church in the town of Sabinov. When he and other Roma pastors realized how the Roma were being shunned at the border, they mobilized their churches.

“We go and pick them up at the border and bring them to our churches,” Marek said in a Zoom interview. His church community has responded with food, supplies, blankets and mattresses – including bringing the items after midnight on the night Marek first learned people were coming. Now, they are housing and feeding as many Ukrainian Roma people as they can.

“Many times they have had bad experiences, so they feel safe coming to us. We as Roma can serve Roma the best. We know the mentality and we know the language. There is no barrier, so it’s easier.” 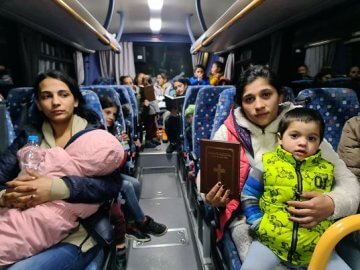 On the bus from the Ukrainian border to a Roma church in Pavlovce, Slovakia, families are given New Testaments in the Carpathian Roma language. Photo: Marek Gombar

When cultural barriers are down, barriers to understanding recently translated Scripture come down, too. The Ukrainian and Slovak Romani dialects are closely related—meaning that some of the Ukrainians are encountering the Bible for the first time in a language very close to their own. Marek’s church holds worship services and prayer meetings for them. He even brought out a small TV one evening and showed the LUMO film version of the Gospel of Mark. The Ukrainians recognized the voices because Marek and others in his church were the ones who had recorded the Romani audio tracks.

“Our goal is also to serve them spiritually, to bring them into the Lord’s peace,” he said. “They are very stressed, and they don’t know about their future. Many of them are crying, weeping. They don’t know where to go, where to flee. It’s a decision in one day to lose the house and everything you were building for many years, and now in one day everything is over and you need to start from the very beginning and you don’t know where to go. So they are very thankful for our churches. Some of them have decided to receive Christ.” 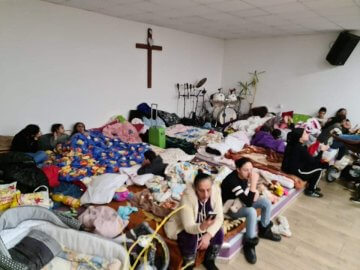 Every caring word and action has not only served the Ukrainians but their suffering and faith have also spoken loudly to their new Slovak friends.

“It is like an awakening,” Marek said. “People start to think of others. Not only do we need help, but there are others who need more help than us.

“When they pray …” Marek says, his voice trailing off. “I tell you, when I was praying with them the tears came on my face. I was so touched. It is really from the bottom of their hearts. Sometimes when we pray we just say the words. But this was from pain and hurt. They’re pouring out their hearts.

“As Christians, we need to do something. These are God’s children, and we need to be salt and life in these days.”