“You Have to Talk to My Father”

As a young Brazilian woman, Kennya Tamara Alves da Silva sensed God’s call. She had grown up in a Christian family and became interested in mission work when she first heard about it in church. 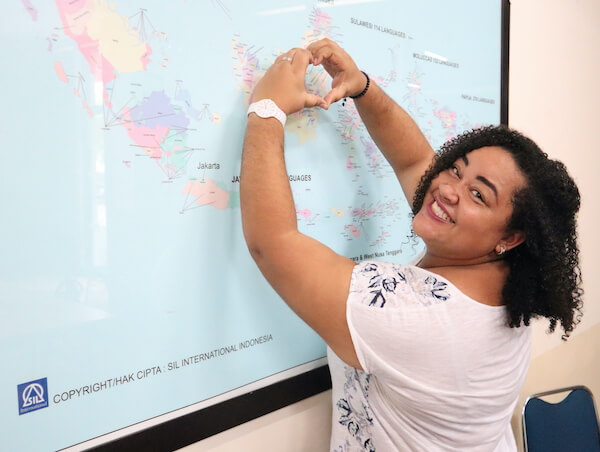 With her hands in a heart-shape, Kennya shows where the Uud’Danum people lives in Kalimantan, Indonesia.[/caption]

Her father did not support the idea at first, though.

“It’s okay to be a missionary, but only when you have finished university and work,” he told her. To many Brazilians, mission work means living in poverty and hunger. He did not want his daughter to suffer.

During Kennya’s first year in university, she bargained with God: “Okay, if you want me to join the mission, you have to talk to my father, my mom and my church. If only everybody said yes, I would go.”

Kennya had never seen her father cry. After praying about the decision with her parents for a week, she found her father talking to her tearfully.

“Now I understand this is what God wants you to do,” he said. 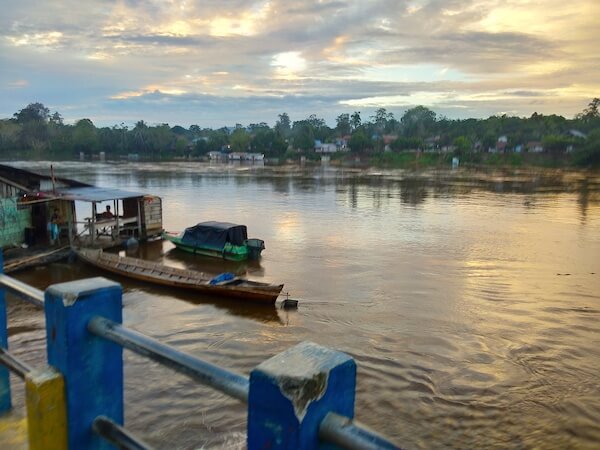 With her father’s consent, Kennya immediately quit university and applied to be a mission worker. She was accepted as a member of Horizons Latin America, a Brazilian organisation of the Wycliffe Global Alliance.

A Lot of Things in One

In 2013, Kennya first set foot in Indonesia. Two years later, she started to serve as a translation facilitator for the Uud’Danum language in the Robeno Cluster project with Kartidaya, another Wycliffe Global Alliance organisation in Indonesia.

Nearly 70,000 Uud’Danum people live in Kalimantan. Their villages scatter along the Melawi River and the Ambalau River. Though many are Christians, they are still influenced by animist beliefs as well.

Kennya said a facilitator’s major responsibility is to make sure the translation that local people drafted and the words they picked match with the real meaning of the Bible. After finishing a draft, the team goes to the villages and ask questions like, “When you hear this word, what comes to your mind?” Questions like this help them to check if the chosen words are appropriate. That is just one of many responsibilities facilitators carry — “a lot of things in one”, Kennya said. 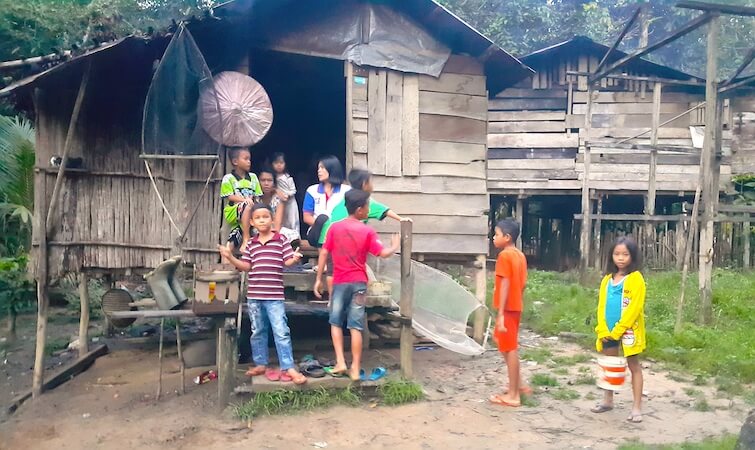 A Privilege to Witness Transformation

Kennya lives in Pontianak in West Kalimantan. To reach the villages, she takes a bus for eight to ten hours, then a speedboat for six hours. Yet to her, the long journey seems quick.

“I am amazed every time when I am there because I have the privilege to see people’s lives changed!” she said.

Hengki considered himself a Christian when he came to help Kennya and her team, but he didn’t know what that really meant. As he was helping the team to check translated Scripture in his Uud’Danum language, he grew interested in God. A year later, he quit smoking and drinking despite addictions to both. Now, whatever church the team visits and serves, he offers, “Can I give my testimony?” Kennya is grateful that God did not wait until the completion of translation to change people’s lives, so that she can witness life transformation like Hengki’s. 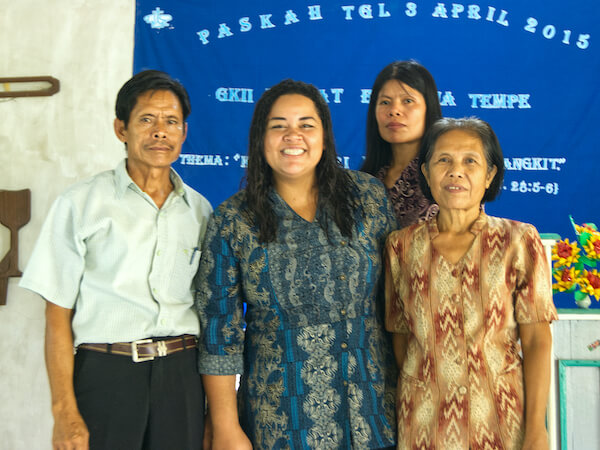 After living together with a woman pastor (back) and her parents in the village for a year, Kennya (middle) started to feel the parents are like her real amai (left) and inek (right).  (Photo credit: Kennya Tamara Alves da Silva)[/caption]

Kennya also is grateful because of her new family in the village. In Uud’Danum, the words for father and mother are amai and inek. After living together with a woman pastor and her parents for a year, Kennya started to feel the parents are like her real amai and inek because they are so kind and caring to her.

“I still call them amai and inek. This is so special to me!” Kennya said with a big smile.

Give Your Best Now

When Kennya came to Indonesia, she was only 24. Some people asked, “Why? You are so young to spend your young years to come this far!” Others asked her why she remained single.

“Yes, but look at the person who translated the first Portuguese [her language] Bible,” Kennya said. “He was only 16. If he could start something that big in my country, I could do the same in another country.” 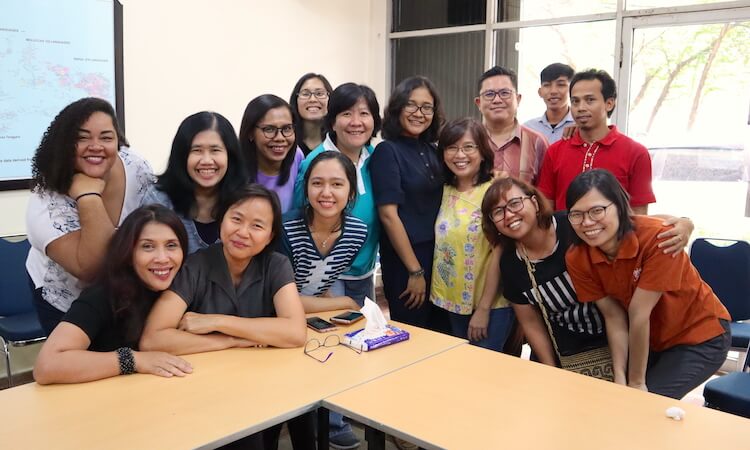 Kennya (left) enjoys friendship with many Indonesians, especially her colleagues in Kartidaya.[/caption]

As for being single, she regards it as a privilege.

“I’m free and young. I can go and work full-time for God,” she said. “If I was married, then I probably could not do it. Even if I could, it was not going to be full-time because I would have kids and a husband to take care of.”

Kennya has seen people wait until they are old and have finished all they feel they need to do, to finally say “I'm going to give to God.” She thinks we should give God the most beautiful years. 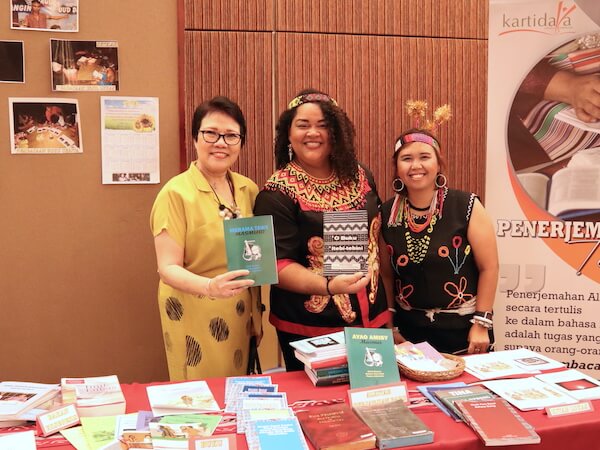 In the celebration of Kartidaya’s 30th anniversary November 2019, Kennya (middle) served at a booth which displayed the translated Scriptures and other materials in Uud’Danum. The two other ladies are Elizabeth (left) and Grace (right), members of Kartidaya.[/caption]

“If it’s okay to leave the family to overseas for work or for marriage, then why not for Bible translation and for helping people to know God?” she asked. “Who is better than God to receive our best?”

The Most Precious Gift

Since Kennya joined the Uud’Danum team, she has been involved in the translation of OneStory and the Gospel of Luke. She hopes to be trained as a translation consultant because the need for consultants in Indonesia is so great.

To Kennya, the Bible is the most precious gift of God that we can give others and she has committed her life in doing so. She said,

“Someday I will leave Indonesia, or I will be in the heaven, but the Uud’Danum people will still be able to read the Bible and be transformed by God’s Word.”