Home Signs of the Spirit

Signs of the Spirit 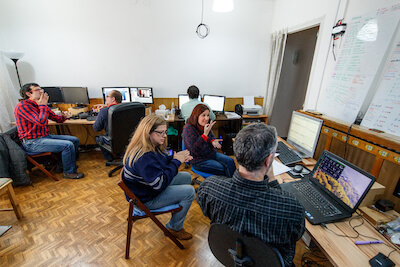 In a small office near Barcelona, Spain, visitors are greeted with the sound of silence. Yet when they look around, they see the flurry of activity – arms moving, fingers signing rapidly, faces expressive. Members of a local sign language Bible translation team are gathered to discuss the translations they have been faithfully working on for more than a decade. They share stories of frustration, triumph, and God’s mission to reach the Deaf of Spain with his Word.

David Roldán Cintas is a Deaf pastor and long-time member of the translation team. While David’s hearing parents did all they could to help him and his Deaf brother, Carlos Roldán Cintas, get a good education, the school they sent their sons to discouraged the use of sign language.

“At school, they would smack our hands and wouldn’t let us sign,” David recalls. “I prefer signing – it’s more natural. When you grow up deaf, you take things in with your eyes instead of your ears, so it’s more natural to move your hands to talk.” 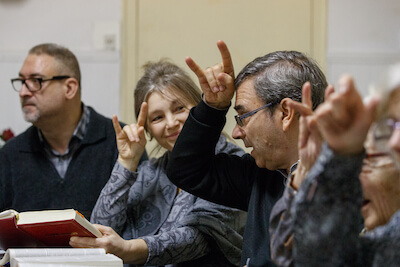 When David and Carlos were adults, their parents realized that sign language was their sons’ heart language and began learning Catalan Sign Language. Their hearing sister, Rut Roldán Cintas, who signed with her brothers since childhood, became a sign language interpreter.

Most countries have their own distinct sign language – and in some cases, several. There are more than 400 unique sign languages, each with its own syntax and grammar. 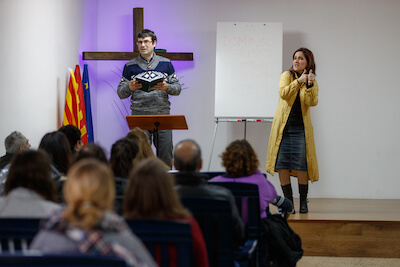 Eloy Lobato Álvarez preaches to the congregation at the Deaf church in Barcelona that is part of the Micrisordos Cultural Association, while his wife, Rut Roldán Cintas, interprets.

Some Deaf people learn to read, write and speak a spoken language, but it can be difficult.

“Deaf people grow up hating to read,” says Steve, the coordinator and an advisor for the team. He shares about a Deaf friend who was asked to read a passage of Scripture: “He read it through word for word, and at the end, the priest said, ‘Well, did you follow what that was?’ And he said, ‘No. I’m like a parrot – I don’t really follow what I just said. To be honest, I don’t like reading the Bible because I want to understand it, but I can’t. I have to look up words in dictionaries. It’s so stressful that it’s not worth the effort.’”

Estrella, one of the translators on the team, has had similar experiences: “Long ago, when I read the Bible, it was really difficult for me. I would try to figure out the words, and I wrote down the words, but they were difficult to understand.” 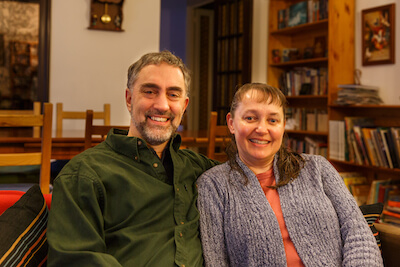 When the Deaf have access to the Bible in their own sign language, they can engage with God’s Word as often as they choose – and without depending on others to explain or interpret it for them.

Eloy is an Evangelical pastor in a city near Barcelona, as well as an advisor for the Spanish/Catalan team. “I want the Deaf people to understand [the Bible] at the same level that I expect the hearing people in my church to understand it,” he shares.

Bible Translation for the Deaf in Spain

More than 20 years ago, Steve and Dianne Parkhurst moved to Madrid, Spain at the invitation of PROEL (a Wycliffe Global Alliance organization in Spain) and prepared to translate the Bible into local sign languages. At the time, such projects were rare.

“We were kind of a ‘guinea pig’ project,” explains Steve. “And if it could work here, then we could figure out how to make it work in some other place.”

The Parkhursts met with numerous Deaf clubs to research their languages. To write down the words they were learning, they used a system called SignWriting, which uses visual characters and symbols to represent hand shapes, motions and facial expressions. 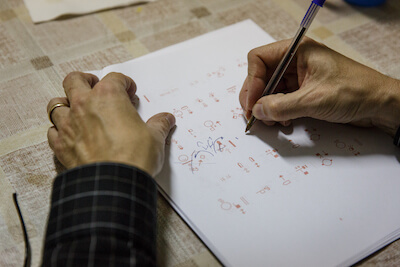 Steve Parkhurst makes corrections to a passage of Scripture that has been translated into Catalan Sign Language after discussing it with a group. While the final translations are done on video, the translation team does initial drafts using SignWriting.

“We got the idea that yes, there was definitely a need [for Bible translation], but no one had the time, energy, knowledge or desire to dive in and help us,” shares Steve.

SignWriting, on the other hand, was an area of interest. In fact, the Spanish Deaf Federation asked the Parkhursts to teach SignWriting to sign language interpreters and others. That became their focus for the next seven years, while they waited for an opportunity to pursue Bible translation. A break came in 2003, when the Catholic Pastoral Committee for the Deaf in Spain expressed interest. The Parkhursts met with Catholic priests and leaders from the Bible Society, and decided to do a pilot project in Madrid. 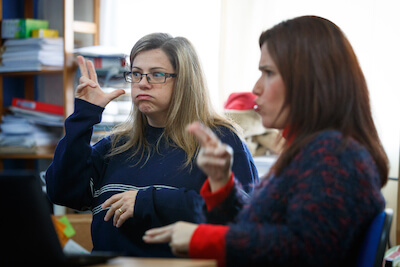 The Parkhursts worked alongside Jose Ingacio Bonacasa (“Nacho”), a deeply committed Deaf Catholic. Steve and Nacho translated parts of Luke and Matthew together into LSE. SignWriting became a useful tool for drafting the translation.

Three years later, the Parkhursts be­gan build­ing a small team in Barcelona to do an LSC trans­la­tion. Two team mem­bers, Es­trella and Rut, be­gan work­ing part-time from there on this ad­di­tional translation. 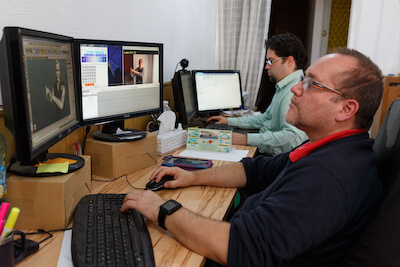 Un­for­tu­nately, prob­lems with Na­cho’s health kept him from con­tin­u­ing. With two team mem­bers al­ready in Barcelona, as well as a grow­ing group of Deaf min­istry lead­ers there, the Parkhursts de­cided to leave Mardrid and move near Barcelona.

“We had a much more sta­ble group here and could make bet­ter and faster progress here than if we had stayed in Madrid,” shares Steve. “Be­tween both a re­ally strong Evan­gel­i­cal church and a Catholic church that was in­ter­ested in the pro­ject, it worked out to be a re­ally good sit­u­a­tion to be here.”

After relocating, the team reversed their process, now beginning with Catalan Sign Language (LSC) and then adapting the translation to Spanish Sign Language (LSE). And more members of the Roldán family joined the team. Estrella and Rut continued to serve the team as LSC translators. Rut’s husband, Eloy, joined to provide advice on the interpretation of biblical texts. Carlos and David came on to handle most of the digital creation and distribution of the translations. Steve continued to coordinate the projects and offer linguistic consulting, and Dianne supported the team with proofing and administration. 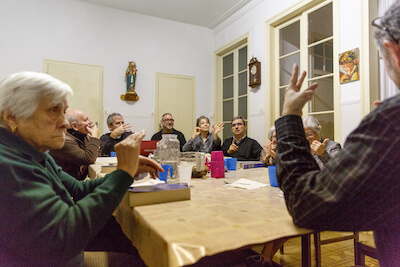 Steve Parkhurst receives feedback from a group of Deaf Catholics at Santa Teresa de l’Infant Jesús parish after presenting newly translated passages of Catalan Sign Language Scripture. The group is lead by Father Xavier Pagès who is hearing and a strong Catholic advocate for Bible translation.

Protestants and Catholics Working Together

Less than 10% of Spain’s population attends church on a regular basis, yet more than 70% of Spaniards identify as Catholic. Evangelicals account for less than 1% of the population.

Years ago, a Catholic priest shared with Steve: “Maybe Scripture is one of those areas where we could have a productive collaboration between the two groups.” 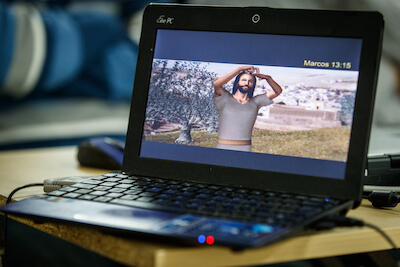 A passage of scripture, Mark 13:15, translated into Catalan Sign Language is being projected from this computer to the Deaf church in Barcelona.

Today, both Catholics and Evangelicals have vital roles in the Spanish and Catalan Sign Language Bible translations. Each group has representatives committed to checking drafts of the translations.

Steve reviews drafts with the Catholic group. “We talk about it and check to see if it’s accurate and if they’re understanding it correctly. Once we’re done with that, [the translation team] comes back together, makes our changes and then takes it to another group, which is Evangelical,” explains Steve.

All Scriptures translated into Spanish and Catalan Sign Language Bible Translation are distributed in a video form. Many passages use a 3D animated avatar.

Steve describes these translation checks as “a beautiful, in-depth Bible study with people who have a hunger and thirst for God’s Word.”

The team strives to respect the differences between these groups of believers and to be as unbiased as possible. All Scriptures are produced in a video format. Some Old Testament stories are filmed with a live signer, but many videos of Scripture passages use a 3D animated avatar rather than a live signer. 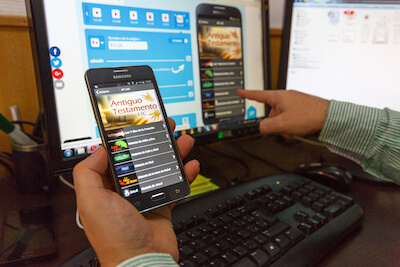 David Roldán Cintas shows the mobile and web version of a website where Spanish and Catalan Sign Language Scriptures are distributed.

Using animation also makes it easier to make changes for differences in terminology between groups. Terms like “God the Father” are signed differently. Catholics traditionally sign this term as “Father God,” going from bottom to top. Evangelicals prefer “God the Father,” switching the order and signing from top to bottom.

“We want to produce a Bible that everyone can use,” Steve says.

By March 2017 the team had translated and distributed the stories of Creation, Adam and Eve, Cain and Abel, Noah, the Tower of Babel, and the Birth of Jesus; as well as the books of Jonah and Mark in both Spanish and Catalan Sign Language. Portions of the book of Luke had been drafted and were being checked in both languages. 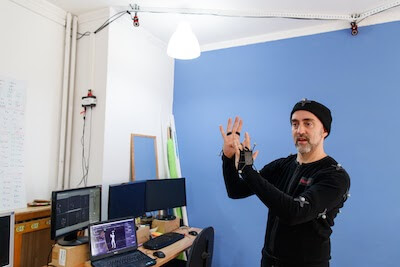 Steve Parkhurst demonstrates the motion-capture technology the team has begun to use to increase the speed of their production.

“I have 20 years of experience working with Deaf people, and 20 years ago, if I were to read a verse, [a Deaf person] would understand maybe three or four words out of the whole thing. Now it is a different story,” shares Rut. “Now, I can send a YouTube video to somebody and say, ‘Here’s the story. Look at it, and we’ll talk about it on Saturday when we get together.’ They can look at it and understand everything about it.” 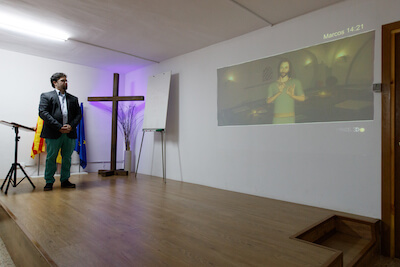 In 2016 the Catholic Pastoral Committee for the Deaf invested approximately $12,000 in new motion-capture technology to help the team speed up the translation. With six new cameras, and the associated computer program, the team can now capture the motion of a person signing and convert it quickly into animation. This has reduced the amount of time spent on creating original animation, which is at least doubling the overall speed of their production.

Yet a lot of work still needs to be done for translation to progress. The team’s biggest needs are prayer, financial support, and more involvement from the Church. Pastors in Spain often do not receive a salary, so it is a challenge to convince them to invest their time and money into Bible translation. But the team continues to press on.

“Our goal is like a burden on our hearts. Deaf people often don’t experience the benefits of the Bible, because they don’t understand what they’re reading,” shares David. “But when they do understand it, those benefits come to them – they touch their hearts and can help them change. [The Bible] supports them and moves them in the right direction. And so, we try to get the word out so people can be saved, so people can understand. We pray that someday the whole Bible will be available for Deaf people.”