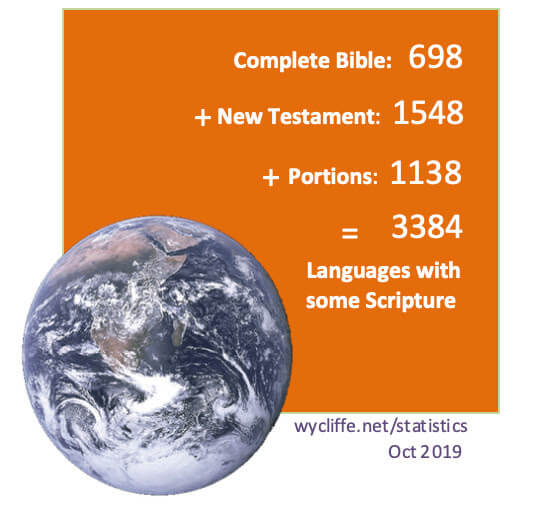 7353 total languages in the world

3384 languages with some Scripture – 6.9 billion people

1.5 billion people, speaking 6665 languages, do not have a full Bible in their first language.

Alliance Organizations are working in at least 1995 languages.

Alliance Organizations are involved in work in at least 129 countries.

Alliance Organizations have been involved in the translation of New Testaments or Bibles in at least 1419 languages.

Alliance Organizations have been involved in the translation of at least one published Bible book in an additional 766 languages.

Translation need is not as simple as determining which languages do or do not have Scripture. Most of the languages with only “some Scripture” are in need of more, and even full Bibles undergo revisions from time to time. See Bible Translation Statistics FAQ: Going Deeper for background explanation of what these statistics “mean.”

These are just a few examples of measurements being talked about. To read more, see: What is Our Theology of Advancement and Progress and What Milestones are Imminent?

Wycliffe Global Alliance presentations of Scripture and Language Statistics are compiled from data provided through progress.Bible by Wycliffe Organisations, SIL International, United Bible Societies and many other partners. Data is current as of 1 October 2019. Population data is based on available information about first language speakers in SIL’s Ethnologue.

Further stories about people and projects are available at www.wycliffe.net and from your nearest Wycliffe organisation.

Note from web editor: 2019 information has been updated in English; information in other languages will be updated as translations become available.

Kartidaya personnel praise and thank God for the completed Scriptures ...

In Memory of Dave Crough

It is with great sadness that we bring you the news that Dave Crough p...