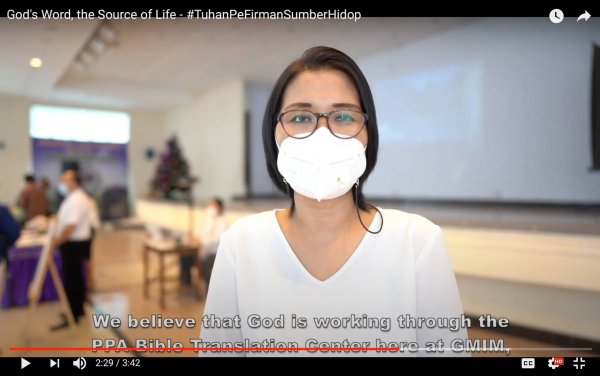 Ayu Suwandi, the Director of PPA.

God’s Word – the Source of Life (This video is produced by GMIM. Used with Permission. Length 3:42)

What do you do when you finally have God’s Word in your own language? You read it.

Not enough? What about joining a reading campaign together with friends and family, to support other language groups who still need their own Bibles?

In Indonesia, that is what the Manadonese* are doing with the completed New Testament in Manado Malay, their heart language.

On 1 February 2021, the Gereja Masehi Injili di Minahasa (GMIM) held a festive launch of a Bible reading campaign – “Reading the Entire Manado Malay New Testament Together” – at their synod office.

GMIM, the Christian Evangelical Church in Minahasa, is a church denomination in Manado, the capital city of North Sulawesi. It is one of the 14 Wycliffe Global Alliance organisations in Indonesia. Completed in 2018, the Manado Malay New Testament was done largely by the translation team of the Pusat Penerjemahan Alkitab (PPA, meaning Bible Translation Centre) of GMIM.

“Our aim is to get people to love their Bibles. Not just the books, but also what’s inside because it is the Word of God,” said Ayu Suwandi, Director of PPA. “We believe that God’s Word is powerful. It gives hope especially in times like these. People in difficult situations like these uncertain times need God’s Word.” 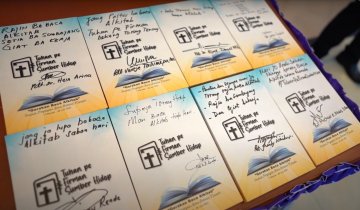 The cover of the campaign pack reads, “God’s Word – the Source of Life.” Photo: video screenshot

They also aim to encourage Christians to love the Lord, go back to the Bible, join in unity and be aware of the need for Bible translation in Indonesia. At the end of the campaign, people will take part in a charity walk for the people groups still waiting for God’s Word in their own languages.

“Manado people are blessed,” Ayu said. “How about the people from other tribes and nations that don’t understand and haven’t received the Good News from God because they don’t have the Bible in their heart languages?”

Since the campaign launch, feedback has been positive. About 6,000 Manado people have joined the campaign, and at least 4,000 copies of the New Testament have been sold. People are now sharing Scriptures on social media, and pastors are preaching from this New Testament.

The campaign challenges people to read two chapters a day, so they can finish reading the entire New Testament by 26 June 2021. The PPA team is producing and posting short videos daily on YouTube to track the momentum.

United by an Unexpected Calling

In their own words