A planned gathering for July was postponed until July 2021 because of the COVID-19 pandemic. Interim Director Barton Maino posted this online message on the original celebration date:

“On behalf of Papua New Guinea Bible Translation Association Board of Directors, Senior Management Team, Administration staff in all our regions, hardworking and committed translators and all partners in PNG and abroad, we would like to thank God Almighty for sustaining PNG BTA for 40 years. We pray that God will continue to allow PNG BTA to reach higher and newer heights into the future. 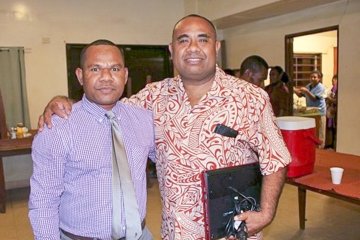 “What a journey it has been! For those who have had a very long association with the ministry will tell of how BTA has grown from infancy to where it is today. They will tell of God’s wonder working power and how He has enabled this ministry to stand the test of time. They will also tell us of moments of great challenge and hardship but will sing praises to our Lord for He was the one who brought them through every storm and high water.

“As we reflect on this day, we celebrate the ministry’s many achievements and how it has contributed to the development of our beautiful country but more importantly the extension of God’s Kingdom. We honor those that have served with the ministry at whatever level and capacity and also pay homage to those that have gone ahead of us to be with the Lord. We recognise their commitment and time rendered to God through BTA since the formation of this ministry. Your labour is never in vain as an eternal reward awaits you, that I can guarantee. To the fathers and pioneers of BTA with your dear wives and families, you are the reason why we are celebrating 40 years today.

“To the translators and our field workers who have toiled countless man hours to ensure our people have access to God’s word in their language, your legacy will be evident in lives that will continue to be transformed by the translated word of God. To the administration and support staff both local and expatriate missionaries, your service to our field teams has been exceptional. Only the One who called you to serve here at BTA will reward your sweat and tears.

“In closing, we could not have done this alone without the support of our external partners and supporters who believed and stood with us for 40 years. We look forward to many more years together. And to the support we have enjoyed locally with other translation organisations, PNG church, families, Christian businessmen and women, private and the corporate sector, we appreciate your generosity.

“Psalms 90:1 A prayer of Moses the man of God. Lord, you have been our dwelling place throughout all generations.

“May the Lord continue to be BTA’s dwelling place in the years to come.”

In 1973, SIL Director Karl Franklin wrote to a few prominent Papua New Guineans, asking them to consider serving on an advisory committee for SIL’s work in PNG. All of them responded positively. Within four years, The SIL Advisory Council morphed into PNG BTA. The new organization was officially incorporated in 1980. Its vision: “Papua New Guineans transformed by the translated Word of God.” The mission statement reads: “Papua New Guinea Bible Translation Association exists to glorify God in PNG. We work with the people to provide the Word of God in their heart language so that they become disciples of Jesus Christ, living like Him.”

Rev. Thomas Polume was appointed BTA’s first Executive Secretary in 1977, after being hired by SIL as Administrative Assistant two years earlier. David and Sineina Gela took up the Executive Director role in 1980, the same year BTA was incorporated. The next five years saw many new translation programs and people join PNGBTA.

The government granted BTA land title on Waigani in 1989, and Wycliffe Associates started construction of BTA’s headquarters in early 1990. The new center was opened and dedicated in October 1991. 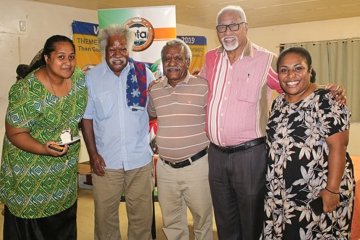 In 2015, Tony Kotauga, became Executive Director. He is on sabbatical for part of 2020, so Barton Maino is filling the role on an interim basis.

BTA’s impact on PNG has been significant. Nineteen New Testaments have been completed (as of 2019), along with numerous Scripture portions. In cooperation with SIL PNG, the organization is targeting about 280 language groups for Bible translation work. They are training and equipping PNG citizens to translate the Word of God in their mother tongues, while helping the Church there encourage and build awareness for missions. BTA is committed to reaching every remaining people group in PNG that does not have Scripture.

“We celebrate our past, present and potential in God. We also repent for not being good stewards of the mandate, gifts, talents and resources entrusted to us. We repent for not giving God’s word to the people of PNG in the manner and phase you anticipated. We thank you for all our partners in the country and abroad. We thank you for the church in PNG and its support. We thank you for our families for standing with the ministry. We thank the current board and management for the leadership.

“Lord, we commit the next 40 years to you. As you have led our pioneers, we believe that you will lead us again. We declare prosperity and success in Jesus’ name. This is the day that the Lord has made, we will rejoice and be glad.”

The completion of the Barlig Bible has become a blessing to another language community that needs God’s Word in the Philippines.