Home Out of Brokenness 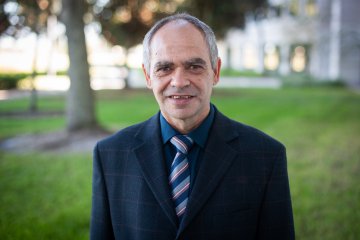 Military service was compulsory for young, white men, and this pastor’s son and future ministry leader found himself conflicted. By the mid-1980s, South Africa had exploded into regional violence in protest of apartheid, the country’s white supremacist system of racial segregation. The president declared a state of emergency.

“It was a violent time,” Stephen says. “Some in a community would take out their anger on each other.”

Stuck on a mountainside during a week full of violence, Stephen’s squad rested late one evening. Their job was to keep people from trying to hurt each other.

“The stars were shining bright and the shoddy shacks were very visible around us,” he remembers. “I was lying half inside the spare wheel of my Land Rover Defender, clothed in my anti-riot gear, waiting for chaos to erupt.

“It was almost as if I heard an audible voice saying to me, Is this how you want to bring peace and restoration to people who are destitute?”

Then, gazing at the stars, he thought of the book of Genesis. He wondered: If God wants us to be a blessing to the nations, and he can make Abraham’s sons as many as the sands on the beach or stars in the sky, what does he have in store for me in this whole picture?

This wasn’t the first time Stephen had questioned what was going on in his country. Growing up prior to the 1980s, white suburban kids thought of segregation as normal. Buses would roll into town in the morning, and black people would step off to go to their jobs. At night, they disappeared back onto buses to head home.

Yet, apartheid confronted everyone, even in places where races didn’t mix. Young men from all over the country were going to war and being killed. Anti-apartheid armies crossed into neighboring countries for cover, and the South African Defence Force attacked them there.

In high school, Stephen realized apartheid reached him, too.

“To be a true (Dutch-descended) Afrikaner, you had to be from one of the three reformed churches, you had to be white, and you had to be Afrikaans speaking,” he says. His father pastored a Baptist church and his mother’s parents were from the UK. Thus, Stephen was not allowed to participate in any Christian student movement activities.

“So you had this segregation and brokenness even between your sameness,” he says. “All of that started raising questions on the morality of the system, even before looking toward people of other color.”

His parents had always emphasized mission at church. Stephen had trouble reconciling apartheid with a love for all people in all nations. Then as a police officer, he saw it tearing his own country apart.

“Everybody at that stage — it didn’t matter what side of the political spectrum you were — we were all starting to envisage that this could not be the future of South Africa. There must be a different way to go.” 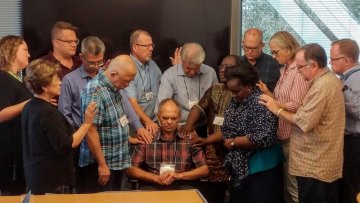 Wycliffe Global Alliance Board members surround Stephen Coertze for prayer in 2019 after his appointment as the next Executive Director.

Stephen is thankful that, during his police service, he never had to do anything that violated his conscience. In fact, he says, the experience heightened his love for people.

Living under, and coming out of apartheid, and now living in a new system in South Africa, provided Stephen a unique perspective to lead the Global Alliance.

“I learned to live with, and among those, who are radically different than me in almost every way, but at the same time almost exactly like me,” he says. “I have developed the ability to live in, navigate, and provide leadership in a context of disruption. I have helped others to navigate their own contexts of chaos. We are working across different theological realms, different political realms, ideological realms, different nationalities and cultures. I think all of that was excellent training ground for where we as an Alliance are now.”