Wycliffe Bible Translators Philippines, incorporated in 2007, focuses on recruitment, training, and employment for the purpose of serving Bible translation efforts in Asia and around the world. In addition, the organization is concentrating on reaching Filipino communities outside of the Philippines. Eleven million Filipinos live overseas; furthermore, 3,500 leave the country each day to seek employment elsewhere. “Our focus is to find them, stir their hearts to participate in Bible translation and connect them with Bible translation projects going on in different places,” says Rev. Dr. Romerlito Macalinao, Executive Director of Wycliffe Philippines. 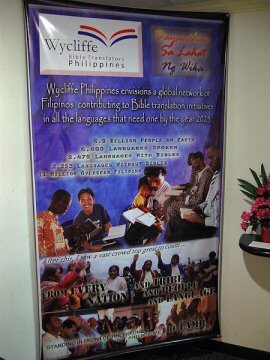 “We need to meet their needs first, to serve the church. When we do mobilization, the churches feel right away that we try to get their money. But when it comes to the global diaspora, that should not come out as the first agenda. The first agenda is ‘How can we serve you?’ Find the needs of the global diaspora. Then as their needs are met, they will say, ‘How can we give back because of how you have been serving us?’”

Wycliffe Philippines wants to start strong partnerships with churches in the Philippines and abroad. “We are all planting churches all over the world, but what about planting churches among unreached people groups? And what about doing Bible work among unreached people groups?” asks Macalinao. “Imagine the thought when we’re all in heaven and here is the particular language group and they will say, ‘We had our Bible, because Filipinos went there, translated the Bible, and started Christian communities.’ Then we would see donors from Latin America, Europe and other parts of the world where Overseas Filipinos contribute towards the translation of the Bible. That’s a great meeting in heaven, and that’s what excites me: when I think of the potential of what Filipinos can do in unreached people groups.”

Macalinao concludes, “It is not about sending missionaries overseas, but to see Filipinos overseas in the established churches giving back to the Philippines. It’s not just going out, but also bringing in,” he said, thereby enabling more Filipinos to participate in strengthening and equipping the church to do its work.

Wycliffe Philippines’ vision statement, “bayanihan sa lahat ng wika,” includes a play on words and means, “Doing things together as a nation, as a people, to go out and do the work of God’s kingdom harvest.”

The passion behind Wycliffe Philippines is the great need for Bibles for more than 2,000 plus language communities in Asia. Macalinao concludes, “My passion is to capture the imagination of Filipinos globally to finally share to them, ‘You can do something. You can give back to the motherland and contribute to the work of the Kingdom.’”

South Africa’s Recent Past Offers Guidance to the Bible Tr...

Recent years have seen a dramatic and steady increase in the...

Who better than God to receive our best? from Wycliffe Glob...