As Wycliffe Bible Translators International (WBTI) was becoming the Wycliffe Global Alliance, its leadership worked toward more effectively engaging with the Church of the global South and East.

The second gathering in 2007 in Singapore called for WBTI to develop a group of ‘reflective practitioners’. This reflective attitude harmonized with sentiments expressed in the Lausanne Commitment that affirm the importance of the message of the Bible and how God is guiding his mission.

The third missiological consultation in Johannesburg in 2008 focused on developing WBTI’s missiological and ecclesiological understanding of its relationship to the Church.

On 1 January 2008, WBTI welcomed a new Board of Directors completely separate from the SIL Board, its own Executive Director/CEO completely separate from the SIL function, and its own administration called the Global Leadership Team. Within a year it moved its operational headquarters from Dallas, Texas to Singapore. While retaining its core values, WBTI was changing its mindset to one more inclusive, interdependent and collaborative than ever before.

When WBTI officially became the Wycliffe Global Alliance in February 2011, it already consisted of over 110 Participating Organizations. These organizations agreed to Alliance core values and strategies, and to working together in the context of Wycliffe’s vision, including Vision 2025.

In its transition from Wycliffe International to the Wycliffe Global Alliance, its leaders weathered much upheaval and change as the organization redefined itself in missiological terms. Since 2008, this renewed organization has been giving greater leadership to the global Bible translation movement. This has also enabled it to collaborate with mission movements and organizations, particularly in the global South and East, that want to partner together within the structure of the Alliance.

Building on the changes outlined in Articles 2 and 3, this article focuses on the history of Wycliffe Bible Translators International (WBTI) becoming Wycliffe Global Alliance in the context of the development of Bible translation. The narrative resumes with the decision of the WBTI Board in 2005 to affirm a greater level of intentionality on the part of the organization to engage with the global Church. A series of missiological reflections was undertaken to help the leadership arrive at a deeper understanding of how to more effectively carry out this engagement. This process laid the groundwork for the organization’s re-emergence, in 2011, as the Wycliffe Global Alliance.

Meanwhile, in 2005 the WBTI Board formalized the organization’s intention of engaging with the Church of the global South and East. This was in recognition of the fact that more and more language programs were being led from these regions of the globe.

In 2006, WBTI sponsored its first missiological consultation, which was the launch of its ‘missiological consultative process’. The meeting was hosted by Wycliffe U.S. at its Orlando headquarters. The purpose was to “provide a framework for our leaders to identify missiological issues that affect the church’s involvement in Bible translation in their various contexts” (Franklin 2007:32). Leaders associated with WBTI realized that in order to see Vision 2025 fulfilled, there needed to be a considerable increase in the number of people of all nations involved. The dozen leaders who gathered for the first consultation recognized, “Bible translation is only one facet of the overarching mission of God [thus] the gathering of resources for Bible translation takes place in a rapidly changing social, cultural, economic, political and religious environment in each nation and at the global level” (Franklin 2007:32).

A discovery from the consultation was that WBTI lacked a foundational ecclesiology.

A discovery from the consultation was that WBTI lacked a foundational ecclesiology. This led to searching the archives of WBTI’s founder, Townsend, to see what he stated about relating to the Church. The investigation returned no results, indicating that the Church, and relating to it, was not part of Townsend’s focus. This discovery deeply concerned WBTI’s leaders because, as Patrick Johnstone points out, “[p]ossibly the most defective partnership is that between mission agencies and local churches…. The centrality of the local church in missions needs to be emphasized, and agencies must be more accountable to their supporting churches for their ministries and use of workers. However, both are vital components of the church and must work together” (Johnstone 2012:234).

The benefits of holding an annual missiological consultation became more evident in the second gathering in 2007 in Singapore. That consultation called for WBTI to develop a group of “reflective practitioners.” It stated that “building on what was covered at the consultation it is essential that our leaders understand and articulate the theological and missiological underpinnings of Bible translation” (Franklin 2008:31).

The third missiological consultation, in Johannesburg in 2008, addressed this concern where the focus was developing WBTI’s missiological and ecclesiological understanding of its relationship to the Church.

This missiological consultative process deeply impacted leaders of WBTI and some leaders of Wycliffe organizations. It created a new recognition that a mission agency that had been very active in a task – that of Bible translation – also needed to balance this approach as it considered its place in the missio Dei. This new realization was articulated in this way: “If we have an action and task oriented mindset towards mission it can mean we have little room for contemplation. The reflective practitioner is a concept that has not been widely embraced. And yet, reflection is important” (Franklin 2009a:14). This new way of thinking was introduced by William Taylor of the World Evangelical Alliance who facilitated the first consultation. Taylor defines reflective practitioners as people “of both action and reflection, committed to God’s truth; obedient in the power of God’s Spirit to the Great Commission in all its fullness” (2000:5).

This reflective attitude influenced by the missiological journey of leaders associated with WBTI is in harmony with sentiments expressed in the Lausanne Commitment that affirms the importance of the message of the Bible and how God is guiding his mission in the world. The Commitment urges Christians to “make the Bible known by all means possible, for its message is for all people on earth” (Birdsall & Brown 2011:13). There is the urgency of “the ongoing task of translating, disseminating and teaching the scriptures in every culture and language, including those that are predominantly oral or non-literary” (Birdsall & Brown 2011:13). Reflective practitioners within WBTI agree with the sentiment behind the Commitment and will no doubt use it to guide their leadership in the Bible translation movement.

On 1 January 2008, WBTI began a new journey. It now had a new Board of Directors completely separate from the SIL Board, its own Executive Director/CEO completely separate from the SIL function, and its own administration called the Global Leadership Team. Within a year it set up its operational headquarters in Singapore, moving it from Dallas, Texas.

WBTI also adopted a new vision statement: “In communion with God and the worldwide church, we contribute to the holistic transformation of all peoples through Bible translation and compassionate services” (WBTI 2008:12). There was also a new mission statement: “Individuals, communities and nations transformed through God’s love and Word expressed in their languages and cultures” (WBTI 2008:12). These two statements better reflected what WBTI and its organizations had become and the direction they were going to take.

In preparation for the start of the new administration, outgoing Associate Executive Director, Darryl Kernick, wrote an article to reassure all of the SIL and Wycliffe personnel that, while this was a new day for WBTI, certain core values were not changing. For example, Kernick stated, “the bottom line remains that WBTI is a Bible translation organization” (2007:4). He pointed out that WBTI was focusing on partners and service, which meant a different mindset that “thinks inclusively not exclusively; thinks movement not institution; thinks interdependence not independence; thinks partnership not individualism; thinks others not ourselves” (Kernick 2007:4). This summary encapsulated how the new leadership team would be shaping WBTI in its next stage of development.

In February 2011, WBTI changed its ‘doing business as’ name to the Wycliffe Global Alliance. The name change was intended to reflect how the organization was repositioning itself in the global context of the missio Dei. The organization was growing and when the name was changed it had already become an alliance of over 110 organizations. Figure 1, below, shows the historic growth of what had become the Wycliffe Global Alliance. The circles, with the United Nations two-letter nation code, represent what had been Wycliffe Member Organizations in each given country with the corresponding year they were formed. The diamonds, with the abbreviations of organization names, represent what had been Wycliffe Partner Organizations and when they were given that status. The diagram also indicates the significant emergence of the WPOs after Vision 2025 was adopted. The majority are located in the global South and East. 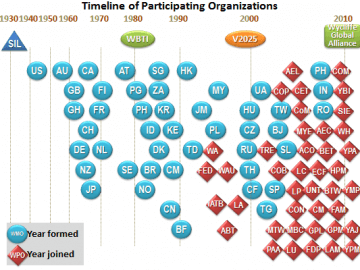 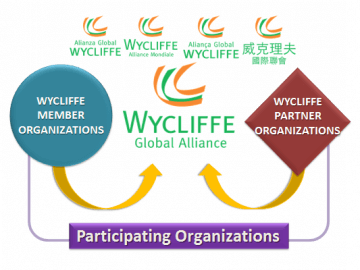 The original Member Organizations had two characteristics: 1) they each had the Wycliffe ‘DNA’ in their identity and function; and 2) they were created by Wycliffe to fulfil the vision. The newer category of Partner Organizations also had two characteristics: 1) they did not have the original Wycliffe ‘DNA’ since they were not created by Wycliffe and had a diversity of identities; and 2) they were committed to Wycliffe’s vision including Vision 2025 and this commitment was formalized in an agreement between each Partner Organization and the Alliance. Both types of organizations were bound together by agreeing to Alliance core values and strategies, and they agreed to work together in complementary partnerships in the context of the vision.

Nearly seven decades after Wycliffe was formed it renewed itself by forming a new kind of organization with a new type of structure. The purpose was to enable it to better engage with the Church worldwide as it shared Vision 2025. Internally WBTI and its leaders weathered much upheaval and change as the organization redefined itself in missiological terms and re-emerged as the Wycliffe Global Alliance.

Since 2008, this renewed organization has been giving greater leadership to the global Bible translation movement. This has also enabled it to collaborate with mission movements and organizations particularly in the global South and East that want to partner together within the structure of the Alliance.

As the Wycliffe Global Alliance continues its transition, it realizes that the Christian faith must constantly be translated in order to be “faithful to the Word [that] speaks to people where and when they are” (Balia & Kim 2010: 255). This is critical because the global Church is changing demographically. Consequently, “Bible translation today takes place in a world where difference and diversity are increasingly recognised and encouraged… where the predominance of one culture over others is no longer accepted, and where cultural polycentrism is a fact of our time” (Balia & Kim 2010: 255) – sentiments from the Edinburgh 2010 Conference.