Home What We Do Papers and Articles The Wycliffe Global Alliance and Bible Translation Movements Missiological Foundations: Pentecost and Paul

In the account of the day of Pentecost (Ac 2), Jews had gathered in Jerusalem from all over the world. The Holy Spirit settled on the disciples and miraculously empowered them to speak the languages of all who were represented. Many who were there acknowledged, “we hear them declaring the wonders of God in our own tongues!” (Ac 2:11).

This event demonstrates God’s acceptance of everyone’s language, and how he uses each to glorify himself. It also establishes the translatability of the gospel and the importance God places on the heart language as a primary means of communicating his truths.

Working together to spread those truths, the Apostle Paul and his missionary bands often made the local synagogue their contact point when they entered a new community. The synagogue was where not only the Jewish people gathered, but also the God-seeking Gentiles, providing a doorway into the whole community. Also, trade routes that intersected at these urban centres meant that Paul’s teaching could easily be taken to local people in surrounding areas.

Paul believed the proclamation of the gospel was intended for the Jew first, even to those living outside their homeland. Born and raised in Tarsus, and speaking Greek, Aramaic and Hebrew, Paul associated as much as possible with the Jewish Diaspora. However, when the Diaspora audience rejected his message, Paul shifted focus to the Gentiles.

The Day of Pentecost

In the account of the day of Pentecost (Ac 2), Jews had gathered in Jerusalem from all over the world (15 regions and countries). The Holy Spirit settled on the disciples and miraculously empowered them to speak the languages of all who were represented. This happened to such an extent that many who were there acknowledged “we hear them declaring the wonders of God in our own tongues!” (Ac 2:11). The event was God’s initiative and it “implied the reversal of the course of Babel” (Gn 11:1-9) because Babel symbolized “the global rebellion against God” (Tennent 2010:412). This reversal therefore helped give birth to the church.

The importance of language and culture

The event in Acts 2 demonstrates God’s acceptance of everyone’s language and how he uses each to bring glory to himself. As Tennent states, “at Pentecost… a small group of Jewish followers of Jesus are baptized into the reality of the infinite translatability of the gospel for every language and culture” (2010:412). Lesslie Newbigin adds, “Pentecost is our biblical warrant for saying that God accepts language” (1989:185). Furthermore there is a looking forward to an eschatological fulfilment when God gathers people from every tribe, language and nation before his throne (Rv 5:9). Thus the Pentecost event establishes the translatability of the gospel and the importance God places on the vernacular language as a primary means of communication of the truths of God.

The Pentecost event establishes the translatability of the gospel and the importance God places on the vernacular language….

Similarly, in Acts 15 we see another kind of demonstration of the translatability of the gospel. This is a translatability brought about through the removal of unnecessary barriers to the penetration of the message across cultural and religious boundaries. Meeting at what became known as the Jerusalem Council, the leaders of the church discussed whether or not Gentile believers needed to become circumcised and keep the Law of Moses (15:5) in order to be saved. The council ended up agreeing with Peter’s conclusion: “No! We believe it is through the grace of our Lord Jesus that we are saved, just as they are” (15:11 NIV). This ensured that the Church would not remain as an obscure Jewish sect, unable to spread beyond established cultural and religious constructs. To put it another way, Gentiles did not have to become Jews in order to become Christians.

The Spirit and the Word

The account of the day of Pentecost also reinforces how God’s mission is dependent upon the Holy Spirit, regardless of any cultural, social, economic, political and linguistic barriers that exist. This is not a passive action of the Spirit but instead he empowers the people of God for an outward movement to the nations; and as they do so they establish the church wherever they gather.

And the account of the Jerusalem Council illustrates, equally, that fulfilment of God’s mission is dependent upon faithful adherence to God’s Word. James, the recognized leader of the church at Jerusalem, calls on the authority of the prophets (Ac 15:15-18), as well as the testimonies of Peter, Paul and Barnabas, before handing down his decision.

The Apostle Paul’s heritage was unique. His father while being Jewish had the “highly prized privilege [of] Roman citizenship” (Latourette 1975:68). Paul was born and raised in Tarsus, a Hellenistic (Greek) city in Asia Minor and was therefore of Diaspora origin. He knew Greek proficiently and was steeped in the Septuagint (LXX).

The Apostle’s three missionary journeys seemed to follow strategies that he developed. However, Eckhard Schnabel observes, “Paul did not follow a ‘defined and regular plan’ which might guarantee the success of missionary preaching” (2008:37). Nevertheless Paul adhered to “certain methodological principles… largely because of his understanding of the non-negotiable nature of the gospel of the Kingdom he proclaimed” (Glasser 2003:294).

An entry point – the Jewish synagogue

In ten locations (out of 48) Paul and his missionary bands made the local synagogue their first or at least early contact point when they entered a new community (e.g. Ac 13:5, 14, 46, etc). This made strategic sense since the synagogue was where the Jewish community “gathered for instruction and worship [where] the services included prayers, the reading of Scripture, and, usually a sermon explaining the Scripture” (Elwell 1996:753). But it was also where the Gentiles would gather and the synagogue placed Judaism on display. It was the place of worship and had a missionary role in attracting the proselytes (Gentiles who adopted Jewish beliefs and practices, including circumcision). It also attracted ‘God-fearers’ (Gentiles who accepted Judaism’s ethics and some of its culture, but refused circumcision) and other Gentile sympathizers (Schnabel 2008:293). It was therefore the natural place for the Apostle to go to as a doorway into a community.

Only after the Jews caused trouble in the synagogues did Paul and his missionary bands move to the Gentiles and leave the Jewish communities entirely. This was consistent with Jesus’ warnings that “the synagogues will be places of persecution” (Elwell 1996:753).

The Apostle used the Septuagint, commonly known as the LXX (Roman numerals for 70 since tradition suggests it was produced by 70 (plus two) Jewish leaders from Alexandria). The version the Apostle used was most likely the Jewish Pentateuch translated into Greek in the third century BCE. Fernandez Marcos suggests this “was an event without precedence in the ancient world” (2000:18) because it implied that the Greek language was widely accepted and used by the Jewish Diaspora in the Hellenistic world.

Greek was the language of the Jewish Diaspora synagogues that Paul visited. In the synagogue the Septuagint was read and taught. Paul knew Greek proficiently and was well educated in the LXX and therefore read from these Scriptures to the synagogue audience (Ac 13:14). He reasoned with his audience about the message of the Scriptures (Ac 17:1) and preached from the Scriptures (Ac 13:5, 15; 14:6, 25, 18:1). To a group of Jewish leaders in Rome, Paul “tried to convince them about Jesus from the Law of Moses and the Prophets. Some were moved by the argument, but not all” (Kaiser 2000:77).

Paul associated as much as possible with the Jewish Diaspora, although they often rejected him. Paul believed the proclamation of the gospel was intended for the Jew first, even to those who lived outside their homeland. He also knew what it was to be a Diaspora Jew, having been born and lived in Tarsus, and speaking Greek as well as Aramaic and Hebrew. He felt at home in Tarsus as much as Jerusalem, in Antioch in Syria, as much as in Corinth (Ecknabel 2008:391). Paul freely became “a Jew to the Jews and a Gentile to the Gentiles, adapting himself and his verbalization of the gospel so it would come as the good news to one and all, clothed in the cultural forms that were most meaningful and appropriate” (Glasser 2003:297).

Early Jewish converts to the gospel were Hellenists (Jewish Christians). They followed Judaism in matters of faith, though “with varying degrees of strictness [and] adopted the Greek language and customs” (Wilson 1989:44). Thus they were known to be more open to change.

Often the Diaspora audience rejected Paul who would then shift his focus to the second contact point, the Gentiles. The Apostle had a specific calling to take the gospel to them (Ac 18:6). Due to the success of Paul’s mission to the Gentiles, Christian belief and practice quickly ceased from becoming simply a Jewish sect since it was embraced by the Gentiles.

Paul and his missionary bands did most of their work in urban areas. These were also Jewish Diaspora centres that provided Paul and his colleagues with synagogues where they could meet with people, but also “marketplaces, lecture halls, workshops and private houses” (Ecknabel 2008:288). The trade routes that intersected at the urban centres meant that Paul’s teaching could easily be taken to local people in surrounding areas.

The following chart lists some of the important centres Paul visited: 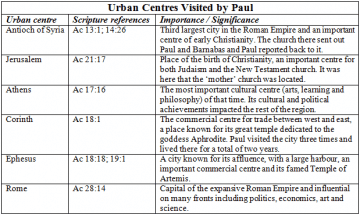 A diverse group of companions assisted Paul. Consequently he was considered to be “a team worker whose letters abound with references to the togetherness he shared with his co-workers in evangelism and church planting” (Glasser 2003:296).

Paul and his team appointed leaders (or elders) in every church, committing them to the Lord with prayer and fasting. This ensured that there was no leadership vacuum when Paul and his team left. Many of the new converts were ‘God-fearers’ who knew much about the Scriptures and when they learned about Jesus, the final pieces fell into place for them. Their background made them ideal leaders for the church.

Reliance on the guiding Holy Spirit

Engaging with the whole gospel

The Apostle proclaimed the ‘whole gospel’ from the perspective that his primary methodology was preaching, teaching, debating, reasoning, and the strengthening of new believers, etc. (i.e. a word-based ministry). However, he also demonstrated the gospel: power encounters, such as healing and working miracles (cripple healed (Ac 14:6); a demon cast out of a slave girl (Ac 16:13); extraordinary miracles (Ac 19:11); restoring Eutychus from his fatal fall (Ac 20:6); being bitten by the viper with no ill effect (Ac 28:1); and the healing of Publius’ father and others at Malta (Ac 28:1).

God prepared an entrance to the Gentile mission through a number of bridging streams including the Jewish Diaspora, use of their synagogues and the use of the Scriptures in the heart language (the LXX). All of this was by means of the messenger the Apostle Paul and his missionary bands.