The Church and Global Mission 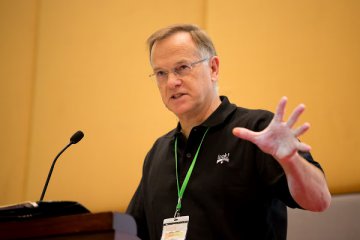 In his second message to look!2012, Dr. Wright built a framework for understanding what ‘holistic mission’ looks like. Scripture reveals that God’s mission encompasses three overarching themes: Building the church (by means of evangelism and teaching), Serving society (by means of justice and compassion) and Caring for creation.

In that message Dr. Wright went on to expand on the first theme, building the church, showing the place and importance of evangelism and teaching—the means of expanding, strengthening and maturing the church—as core mandates of the Great Commission. He reminded us that “it takes a disciple to make a disciple.”

Now, in his third and final message, Dr. Wright turns to the areas of compassion and justice as the expressions of our service to society; and to a fuller biblical understanding of the place of creation care in the full scope of holistic mission.

When Jesus was about to depart this earth and gave his final instructions to his disciples, he told them (after first reminding them of the authority vested in him by the Father) that they were to go into all the world, make disciples of all nations and, in that endeavor, “teach them to obey all I have commanded you.”

Wright called this expression within Jesus’ Great Commission “pure Deuteronomy.” There was always a powerful emphasis on obedience to God’s commands in the books of Moses, particularly in Deuteronomy. It was not just the following of a set of rules; it was imitating the very nature of God as a God of both justice and compassion. A key passage on this theme is Deuteronomy 10:12-19, which includes a foreshadowing of Jesus’ final instructions: “And now, O Israel, what does the Lord your God ask of you but to fear the Lord your God, to walk in all his ways, to love him, to serve the Lord your God with all your heart and with all your soul, and to observe the Lord’s commands and decrees that I am giving to you today for your own good?” (vs. 12-13, emphasis added).

And what are “his ways”? They clearly include justice and compassion: “For the Lord your God…shows no partiality and accepts no bribes. He defends the cause of the fatherless and the widow, and loves the alien, giving him food and clothing” (vs. 17-18). The passage goes on to say in verse 19 that God’s people should do the same things God does. Wright cites other passages (from among many throughout Scripture) that echo God’s heart in this matter:

There are many examples from Old Testament Scripture that reveal God’s expectations on both aspects—being and doing/proclaiming. Wright cited these passages as examples:

Thus, Israel had a mission to be something for the sake of the knowledge of God among the nations. It should be clear, from the above passages and others, that our ‘being’ – who and what we reflect – is an extension of God in us, revealing His own character and values through us to a broken world.

Highlighting a passage from Isaiah 58, Wright said that light shines from people who are committed to compassion and justice. What characterizes this shining light according to Isaiah? If God’s people “loose the chains of injustice…set the oppressed free…share food with the hungry…provide the poor wanderer with shelter…clothe the naked”—“Then your light will break forth like the dawn” (Isaiah 58:6-8). Wright concludes on this passage: “Light was ethical as well as theological.”

These things are echoed and reinforced in the New Testament. Jesus says to his disciples, “You are the light of the world … Let your light shine before men, that they may see your good deeds and glorify your Father in heaven” (Matt 5:14, 16 – emphasis added).

The apostles and the early church were as committed to living in obedience to Jesus’ teachings on serving society, as to preaching about salvation through Jesus:

Citing the work of Wycliffe and SIL in their work of providing Scripture as an example of the outworking of these things, Wright said, “You know perfectly well that, when you give people the gift of a preserved language, a language now written down…and give them status and literacy, you are engaged in a process that has social, political and economic impact and results … because you are affirming the dignity of every language and culture and ethne. You are saying, ‘everybody matters, everybody counts.’ You are building on the biblical truth … that God created ethnic diversity, and loves it, and wants to affirm the dignity of every language and tribe, people and nation.”

As a preamble to his Great Commission to his Church, Jesus said, “All authority in heaven and on earth has been given to me” (Matt 28:18 – emphasis added). In saying this, Jesus is once again hearkening back to ancient truth as expressed in Deuteronomy: “Acknowledge and take to heart this day that the Lord is God in heaven above and on earth below. There is no other” (Deut 4:39).

But what are the implications of this – that he has all authority “on earth”? After all, he is about to depart this earth!

Paul, in his letter to the Colossians, gives us a powerful and clear statement about the role of Christ in creation (1:15-20). He tells us that “…all things were created by him and for him…and in him all things hold together” (vs. 16-17). Further, “…God was pleased to have all his fullness dwell in him and through him to reconcile to himself all things, whether things on earth or things in heaven…” (vs. 19-20). The entire universe was created, is sustained, and will be redeemed by Christ. In short, since Jesus is Lord of all creation, including the earth, we are to care for and about it.

Wright asked: Why is it, that there is so much neglect of this truth among evangelicals? It’s because of a defective theology of creation itself. It’s almost as if our Bibles began with Genesis 3 and ended with Revelation 20. But the Bible begins with Genesis 1 and 2, and ends with Revelation 21 and 22; it begins with creation and ends with the new creation. So a whole theology of redemption must include creation. What does God say about his creation?

The goodness of creation

First, creation is good in relation to God:

Second, creation is good in relation to us:

The glory of creation

Creation exists to give glory to God and for mutual enjoyment – God in his creation and creation praising God:

The goal of creation

All creation is included in God’s plan of redemption (because creation needs redemption):

All of this, Wright observed, reveals that the prophets “included ecology in their eschatology.”

Finally, humanity itself has a final destination when all these things have been accomplished:

What are the implications of all this, for the Church and its mission? Should everyone be trying to do everything? What happens when things become difficult, when results are not as expected? Dr. Wright concludes his presentation on Holistic Mission and The Church and Global Mission with some key reminders:

Now in its fifth month, the war in Ukraine continues to upend life and...