Home What We Do Papers and Articles Holistic Mission

What is ‘holistic mission’? Where should we start? 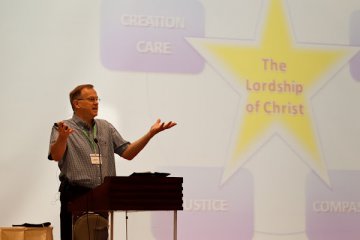 When we consider what ‘mission’ is, we can easily fall into a trap. Either it is, in its entirety, ‘evangelism and discipleship,’ or it is ‘social justice’ with the former taking a back seat or being ignored altogether.

Biblically, mission is inherently holistic. Biblically, the Church exists in history for the sake of God’s global mission. Holistic mission is mission that is concerned about the whole scope of human need. But that begs a question: What do people really need? God’s “global mission” for the Church incorporates the whole Church to the whole world. But that raises the question: What is legitimately included in the mission of the Church?

The true starting point: the mission of God starts with God

What is the great plan and purpose of God? Paul expressed it succinctly in his letter to the Ephesians: “to bring all things in heaven and on earth together under one head, even Christ” (Eph 1:10b). God’s aim, as Dr. Wright put it, is “to redeem the whole of creation, broken by sin and evil, into the new creation, populated by the redeemed from every culture, through the cross and resurrection of Christ.” The whole counsel of God—the Scriptures from Genesis 1:1 to Revelation 22:21—reveal the arc of human history in light of God’s plan and purpose:

Many attempts have been made to define what God’s mission is. In 1984, the Anglican Communion published a declaration on “five marks of mission”: Evangelism, Teaching, Compassion, Justice and Creation care—all held together under the lordship of Christ. This conception has deep roots in the whole of the Bible, including the Great Commission. It might be diagrammed like this: 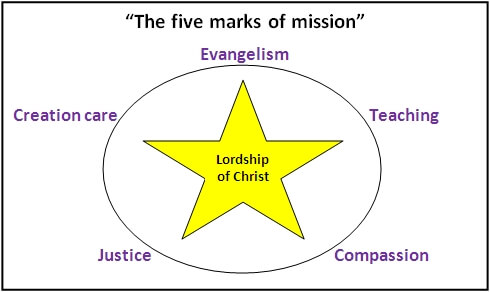 These five marks are interconnected, like points around the rim of a wheel. The wheel is united by its hub, the lordship of Christ over all aspects of life and mission.

Another way in which this model can be pictured is to arrange the five points under three broader categories of Christ’s mandate to His people—Building the church, Serving society and Caring for creation: 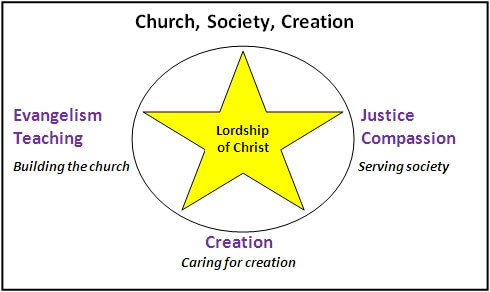 Does the Great Commission begin with a command, “Go and evangelize”? No, it begins with a statement: “All authority in heaven and on earth has been given to me.” He is Lord—over his church, over human society and over his own creation. So the concept of Biblical holism, in which we are called to participate, addresses our interface with individual persons, with society and with creation. All three of these are broken by sin, with resulting suffering, death and destruction—but all three are also included in the redeeming love and mission of God.

Jesus now moves on to the matter of building his Church: “Therefore” (now that the issue of authority has been settled) “go and make disciples of all nations, baptizing them in the name of the Father and of the Son and of the Holy Spirit, and teaching them to obey everything I have commanded you.”

Dr. Wright noted that, in Scripture, the word ‘Christian’ occurs only three times. But the word ‘disciple’ occurs around 237 times.

Evangelism, the first step in the disciple-making process, can be interpreted as “gospeling” or “good-newsing” to the world what God has promised and accomplished through Christ. But what is the place of this “gospeling” activity in the picture of holistic mission? Wright said there are two common traps into which we might fall. The first is to see holistic mission as including everything else except evangelism (a one-sided social gospel, if you will). The second trap is to view it as incorporating everything (including evangelism), but without integration. Wright called this the “bag of marbles” approach. It’s multiple-choice, a take-what-you-want-and-leave-the-rest philosophy.

Getting back to the wheel metaphor, we can see that the Lordship of Christ is central. It holds the wheel together and provides the power for it to meet the ground and move along it. This is a good picture of integral mission (another way of saying holistic mission). All parts are interconnected, each part has its function, and all working together move the Church forward. So, what does the fullness of evangelism look like as we speak of ‘integral mission’? It is both proclamation and demonstration of the good news.

When Jesus walked the earth and chose 12 men to follow him, he spent the best part of three years doing one thing: teaching. And in doing so he was following an age-old biblical/rabbinical tradition. Dr. Wright noted Andrew Walls’ observation that the Old Testament narrative of God’s dealings with Israel was the “oldest and longest program of Theological Education.”

The Apostle Paul demonstrated all the important aspects of teaching (disciple making) in the course of his long ministry. Of course, as he traveled on his several missionary journeys, he preached the good news of Jesus Christ wherever he went. But that was not all.

“We proclaim him, admonishing and teaching everyone with all wisdom, so that we may present everyone perfect in Christ.” Col. 1:28

(The next article will summarize Dr. Wright’s final message to look!2012, which completes his thoughts on the aspects of Serving society (Compassion, Justice) and Caring for creation.)