Home What We Do Papers and Articles Come in with praise; go out with hope

Come in with praise; go out with hope

View the second and third presentations: Holistic Mission (Monday, 7 May 2012); The Church and Global Mission (Tuesday, 8 May 2012).

Psalm 33: The certainty of hope 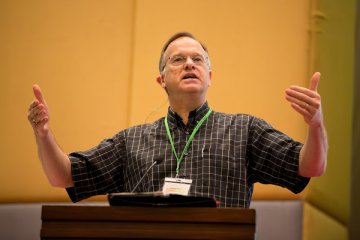 In our times some might ask, “Do we only have a ‘relativity of truth’? Is truth relative to culture only?” And many might say today, “There is a worldwide web, but there is no worldwide truth.”

With resounding opposition to such often-prevailing views, Christopher Wright responded:  “No!  There is such a thing as truth—truth for the whole world.”

As he began his exposition of Psalm 33, Wright highlighted the fact that God’s truth—revealed to us in God’s word—is universal truth, not merely something from a local deity worshiped by an ancient collection of tribes called ‘Hebrews’—applicable only to those people at that time and place. Affirming the criticality of God’s revealed word as something inherent to God’s plan (how God intends to become known by people of all nations), Wright noted as an example how Scripture was read and made clear to its hearers in the time of Nehemiah, soon after Israel’s return from exile:

“The Levites…instructed the people in the Law while the people were standing there. They read from the Book of the Law of God, making it clear and giving the meaning so that the people could understand what was being said” (Neh 8:7-8 NIV).

A song of hope

Psalm 33 is a song of hope. It is a song about hope in a God who transforms, who creates, who rules all, who sees and cares for all. What makes it a song of hope indeed is its universal scope. This theme of universality is repeated several times through the psalm: “…the earth is full of his unfailing love” (v. 5); “…let all the people of the world revere him” (v. 8); “…from his dwelling place he watches all who live on earth—he who forms the hearts of all…” (vs. 14-15).

Hope from the power of God’s word

God’s world-transforming word: Ps 33:4-5. God is in the business of putting the world to rights, reversing the power and effects of sin. The fourth and fifth verses remind us that God is a God of integrity, committed to justice, pouring out his love on all the earth. God is both just and loving and, as Wright put it, “on that foundation rests any concept we have of holistic mission, because if we are engaged in his wider purpose of participating with God…it is because God himself is committed to these things.”

God’s world-creating word: Ps 33:6-9. God spoke the world into existence. He spoke…and it happened. God is the God of the whole earth because he created the whole earth. Throughout human history people have believed that the heavens (v. 6), the seas (v. 7) and the earth (v. 8) all have spiritual powers of their own. But the truth is that they all owe their existence to the Lord. The heavens are merely air, vacuum and created bodies, not guiding astrological forces; the seas are merely large containers of water, not the locus of evil and chaos; the earth is merely rock and soil, not the embodiment of a fertility goddess.

God’s world-governing word: Ps 33:10-11. God rules the world according to plan. Since God is the God of creation, he is also the God of history. The plans of the Lord are revealed through his prophets. All of creation and history are from Christ (God’s creating Word) and for Christ (God’s redeeming Word).

God’s world-watching word: Ps 33:13-15.  God is calling the world to account. God is the God who sees, who watches and considers “all who live on the earth.” How is this known? It is revealed through the power of Israel’s stories, especially where those stories reveal God’s care for individuals in need. The slave woman, Hagar, treated unjustly by her master and mistress, said of God, “He is El Roi, the God who sees me.” Hannah, a woman who suffered from barrenness, cried out, “You, the Lord, are a God who knows.”

Given these truths about the power of God’s word to transform, create, govern and see—how are we to live in light of it? The psalmist weaves appropriate responses throughout the fabric of this song of hope: