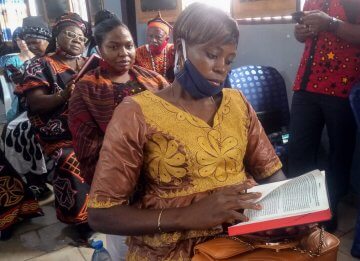 A Pinyin-speaking woman looks through the newly dedicated New Testament during the dedication ceremony.

Speakers of the Pinyin language, displaced by an ongoing sociopolitical crisis in Cameroon’s northwest and southwest, say they have found new joy in the Pinyin New Testament.

The New Testaments had actually been completely translated, printed and shipped to Cameroon by 2018. But they remained in boxes, as political disputes between the country’s English-speaking minority and French-speaking majority degenerated into an armed conflict. Over 3,000 people have been killed and at least 437,500 others displaced by the unrest, according to the United Nations and Human Rights Watch.

Among those displaced are many of the 40,000 Cameroonians whose mother tongue is Pinyin.

As the crisis persisted, distributing the New Testament and organising a dedication in a Pinyin community became difficult. Most speakers of the language are living miles from home, scattered to safer areas of the country. The wait for the completed New Testament became more frustrating when they knew it was at their doorsteps.

“We don’t know when the crisis will end. And the Bibles are already available,” said Pastor Samuel Fobot, Chair of the Pinyin Inter Church Organisation. “We cannot continue to keep them in boxes. That’s why we decided to dedicate and distribute the Bible in smaller groups, where Pinyin speakers have been displaced to, or where some naturally live.” 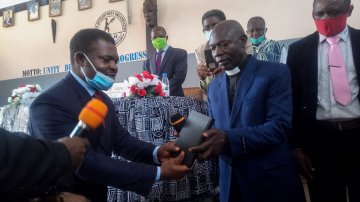 The Pinyin New Testament was dedicated on 30 August, 2020, near the capital city of Yaounde. Lynda Ngwafor, a Pinyin speaker who has been living in that region, says the New Testament is her new source of hope.

“I left Pinyin in 2018 when the crisis degenerated and I have been here for the past two years,” she said. “Life here has been very difficult. We have little or no support. This Bible in my own language is my only source of hope now. I will use it for my Bible study. I will also download and listen to the audio version, while sharing with Pinyin speakers who have not yet learned how to read and write in the language.”

The dedication comes after 16 years of work championed by the Cameroonian Association for Bible Translation and Literacy (CABTAL), in partnership with the Pinyin Inter Church Organisation. The project was funded by OneBook and Covenant Community Church near Baton Rouge, Louisiana USA. 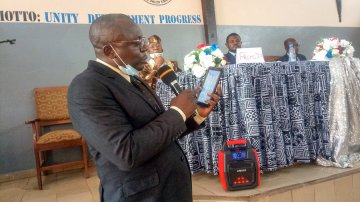 A representative of the Pinyin Development Organisation explains to pastors how the Bluetooth speakers connect to smart phones and play audio Scripture.

The translation has also been recorded and a version developed for the YouVersion app. These were dedicated along with the printed text and a Pinyin-English/English-Pinyin dictionary. This begins a new era for the Pinyin-speaking community as plans have been developed for Scripture engagement. To help people listen to the Scriptures, the Pinyin Development Organisation mobilised 7 million CFA francs (about $12,500 US) to purchase large Bluetooth speakers, SD cards and smartphones for all 63 churches in the community. The YouVersion has been loaded into each kit.

Part of the money also has been set aside to fund smaller dedications in other areas hosting displaced Pinyin speakers, and eventually in their home community when the crisis ends. In the meantime, some Pinyin speakers have asked for mother-tongue literacy classes to be organised in their new settlement areas so that more internally displaced people can access the Scriptures, too.

“This is the first time we are dedicating the printed version of the Bible, along with the YouVersion, or the electronic version,” Emmanuel said. “We have done this in partnership with community stakeholders, most of whom are miles away from their community. These people are either settled out of the community or have been internally displaced. One thing we are confident in is that though we are dedicating with a group of people who are away from the community, there is a possibility for other dedications in some targeted localities and even in the community itself.

“Our hope is to impact the Pinyin people as God’s Word will bring healing to their hearts, wherever they are.”

“At long last, we have dedicated our Pinyin New Testament Bible in its twin format — the printed and the audio,” said Kenneth Asobo, Pinyin speaker and head of the team that organised the dedication. “As you can see, I am very happy. This means a lot to me, because this takes the Scriptures closer to my heart. The Pinyin man’s privacy is in the mother tongue, so the Word of God has penetrated our privacy.”

For his part, Pastor Samuel spoke joyfully when he received the New Testament from CABTAL.

“This is power given to us. We are glad that the Word of God has come to us in our mother tongue,” Pastor Samuel said, holding his copy of the New Testament close to his heart. He added that a man who stopped coming to his church later returned when they began using mother-tongue scriptures.

“Our churches will grow as people will be inspired to begin doing things differently and we want to see many more people coming back to our churches,” he said. “The way it’s been made, I can carry the Bible in my phone. Even if I am in my farm or in the kitchen or while taking a walk, I can listen to Scriptures.”