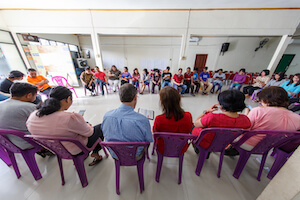 Staff involved in the West Kalimantan Cluster begin their work day with a time of worship.

Peek through the glass doors of Hebron Church in Pontianak, Indonesia, and you’ll see dozens of men and women from six language groups – and six different denominations – working together to translate Scripture into their own languages. They’re sent and supported by their local churches, sustained and encouraged by Hebron Church, and equipped and guided by trained consultants from around the world.

But this effort, the West Kalimantan Cluster Project, is not just a way to get more Scripture to more people in less time. It’s a victory in a spiritual battle. This is a story of hundreds of people seeking God’s face and following his will. It’s a story of answered prayer.

In September 2012, Marnix Riupassa, Kartidaya’s director, was on his knees in West Kalimantan province, crying out to God to unite the hearts of pastors from dozens of denominations. The churches here had never worked together before. Tomorrow their leaders, from six related language groups, would make a momentous decision: would they collaborate on Bible translation? These groups included nearly 600,000 speakers who had only heard Scripture in what, to them, was a second language – if they’d heard it at all. 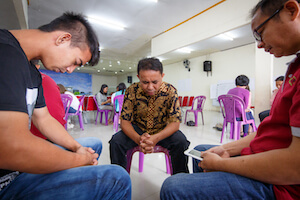 Staff involved in the West Kalimantan Cluster pray before beginning their work.

Marnix and other leaders of Kartidaya, an Indonesian Wycliffe Global Alliance organization, had come to West Kalimantan to ask these pastors to step across dividing lines to get the Word of God into the languages their people understand best. There was no guarantee of how this meeting would turn out. But Marnix knew that prayer would be an essential part of the story.

Earlier that year, Marnix  felt convicted of prayerlessness in his own life. He repented before his staff, and declared his intention to change. God led other Kartidaya leaders to do the same.

Soon after, Marnix was called up from Jakarta to represent Kartidaya in a local ‘cultural court’ in West Kalimantan, an Indonesian province on the island of Borneo. Kartidaya had just one member working in West Kalimantan at that time. Local leaders believed he was trying to profit off the community. Misunderstandings and grievances escalated to the point of involving the court.

Marnix says, “We’ve seen many spiritual battles happen in the field…not when we are starting to print the Bible, but when we start [building]…community.” 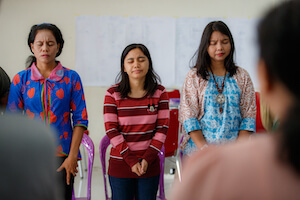 Staff from the West Kalimantan Cluster pray together.

“I spent one week in fasting and prayer,” he remembers. “Not only me, but the community of Kartidaya and my prayer supporters. We prayed, and then I faced the cultural court.”

The disagreements were resolved. Peace was restored. God had answered prayer. But Marnix was convinced that God wanted more for his people here than just lack of conflict.

“The enemy was very strong here,” Marnix says. “And there are still so many languages…We had to pray.”

Pastor Daniel Alpius and Marnix committed to pray for West Kalimantan, and they called others to join them. 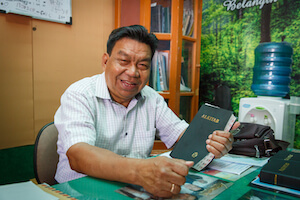 The year before, Kartidaya had invited Pastor Daniel and five other pastors from West Kalimantan to visit a cluster project in the Sulawesi region of Indonesia. There, another Bible translation organization was working alongside local believers to simultaneously translate Scripture into three languages. The pastors from Kalimantan were impressed by what they saw.

For three days, they watched believers enjoying fellowship together as they translated. They heard about how the teams were using the Scriptures in their villages. They decided they wanted to see this approach used to reach those in West Kalimantan. This would change everything. But it was hard to imagine. Different language groups, different denominations, geographical and cultural barriers…there were many obstacles to overcome. Many people would have to catch the vision for the work.

Pastor Daniel and Kartidaya decided to facilitate a gathering of pastors and denominational leaders back home in West Kalimantan. The night before the meeting, they felt the urgency of the moment, the weight of the decision being made. Their hearts were heavy for the people of West Kalimantan. 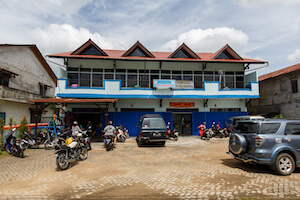 “This was not an easy meeting. This was a very heavy meeting,” Marnix recalls. “On the night we arrived… ‘Let’s pray.’ The next day, we prayed again, six in the morning. Fasting, praying, and everybody was crying. I cried out to these pastors: ‘God has a plan for your community!’”

“Prayer has a role to unite the Body of God’s people together, [creating] spiritual unity,” Marnix says.

God used it to unite the leaders in West Kalimantan. By the end of the meeting, by God’s grace, it was unanimous: “We will work together.”

Teams on the Ground

From that moment on, Bible translation into the languages of West Kalimantan has been in the hands of the Church, with Kartidaya ready and eager to help. The local pastors decided to begin with Bible stories to be shared orally, then move into translation of Luke’s Gospel and the JESUS Film over the next three years. After some initial language survey and planning, believers from six West Kalimantan language groups came together for the first OneStory workshop in Pontianak. (Catch some of their experience in this video.)

Over the next two and a half years, the teams from these six language groups attended 10 OneStory workshops, each team developing a panorama of 22-25 Bible stories. Overall, at least 50 native speakers participated in the workshops. 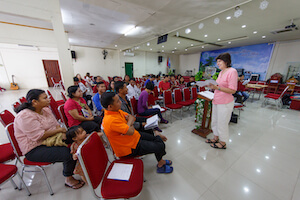 Workshops are conducted regularly at Hebron Church in Pontianak for staff involved in the West Kalimantan Cluster.

At the closing ceremonies of each workshop, pastors from each language community commissioned the participants to go forth into their home villages and share the Bible stories. These translators are passionate communicators, says translation consultant Robert Hammond*, because they themselves are being changed through their interaction with God’s Word. 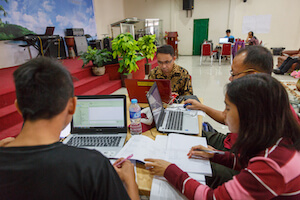 Staff from one of the six translation teams works together.

Translation of the Gospel of Luke is now underway. The same six teams are participating. They come together in Pontianak to check their work. They learn and they practice what they’ve learned, leaving each workshop with a new Scripture portion translated. Then they return to their villages to draft more of the translation. Little by little, God’s Word enters the languages of West Kalimantan. Church leaders are already using the translations in their church services and promoting it in their communities.

The Whole Body in Action

Behind each pastor and each participant in the West Kalimantan cluster project are local congregations providing prayer, encouragement, and on-the-ground support. Churches send their own people, pay for them to come, and give as much as they can toward their living expenses. In one language group, the local church recently decided to raise funds to provide a salary for a full-time translator. 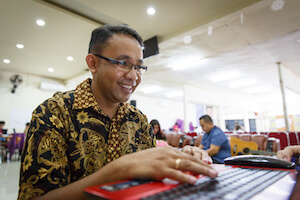 Pastor Daniel’s church, Hebron Church, in Pontianak, provides food and accommodation for the workshops; Kartidaya simply brings in the trainers and computers. Pastor Daniel offered his church as home base back in 2011, on his first visit to the cluster project in Sulawesi. Hebron Church is an Indonesian-speaking church, not made up of speakers of the languages involved in the project. At first, some church members questioned the decision to host the project, thinking it would be too heavy a burden for their congregation and facilities to bear. Today, those who once objected consider it a privilege.

Seizing this opportunity to serve has brought new life to this Body. Church members are opening their homes and offering their vehicles. Giving has increased. The church has grown. They plan to host another cluster of seven languages beginning to translate oral Bible stories. They are even constructing a new building for these workshops and other mission-related activities. 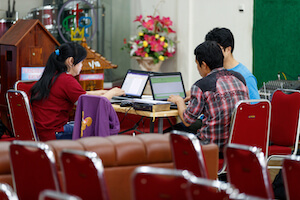 Six translation teams are part of the West Kalimantan Cluster.

“We have to be the role model for partnership,” says Pastor Daniel. “Hopefully in the future, not only this church, not only Hebron, but other churches [will] support mission as well. “

Kartidaya wants every Bible translation project they are involved in to flourish like the West Kalimantan cluster project, to engage a network of churches and organizations right where the people live. 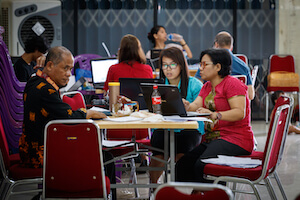 Meeting six times a year at Hebron Church, these translation teams have developed a deep sense of comraderie and spiritual fellowship.

“This is theirs,” says Ristianti “Tanti” Puspitasari, a translation consultant from Jakarta, Indonesia’s capital city, working with the West Kalimantan cluster project. “After it is finished, [the language communities] are the ones that are going to use it for generations and generations. They are the ones who are going to make decisions.” 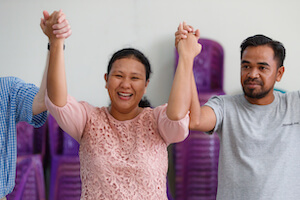 Ristianti “Tanti” Puspitasari and her colleagues raise their hands during morning worship before they begin working.

Six language groups now have access to truth that no one can take away. People in West Kalimantan were hearing the Word as if from a distance, muddled and soft. Today, they hear God speaking loud and clear.