Home A Tribute to Roger Welch

A Tribute to Roger Welch

The Alliance mourns the loss of Rev. Roger Welch, who died Saturday 26 March after a long illness. He was 70. Roger served 20 years on our board (1996-2016). As board chair, he led Wycliffe Bible Translators International through the process of becoming the Wycliffe Global Alliance.

After WBTI replaced the position of president with that of a chair in 2005, Roger was the first person elected to that role, in a part-time, volunteer capacity. Before and during this role, he also served on the Wycliffe UK board and was pastor of Merland Rise Church, Epson, UK.

Roger would serve as chair until he retired in May 2016. Near the start of his tenure, he was involved in guiding the separation of WBTI’s administration and board from SIL. Roger guided the WBTI Board through the complicated process of restructuring the organization so that it became an alliance of Bible translation organizations in 2011. 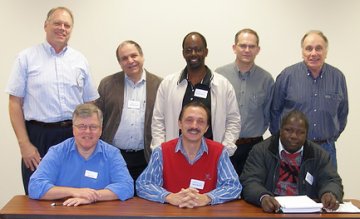 Also during Roger’s chairmanship of the WBTI board in 2008, he was involved in appointing Kirk Franklin as WBTI’s first executive director.

“Looking back, I can say without hesitation that Roger was God’s person for this critical time,” says Kirk, who served in the role until 2020. “We needed all that he was for all that we had to go through at the time.”

“During those years we journeyed together through good and challenging times,” Kirk adds. “He provided the mature, humble, thoughtful, godly and graceful leadership we needed. We have lost a great servant leader in the church and global mission.”

Roger is survived by his wife, Diane Welch; daughter, Danielle Welch; and daughter, Rebekah Yerby and her family. Diane and Roger moved to Chesham, UK for their retirement, but lived most of their life in Epsom, UK where Roger served as pastor of Merland Rise.