Home A Ministry of Reconciliation

As a seminary student, and about three years after leaving the South African police force, Stephen Coertze had an unexpected encounter with grace and reconciliation.

Students were expected to visit churches and give presentations to encourage financial support and recruitment for the seminary. In 1989, Stephen and a few other seminary students spoke at a Baptist church in Kimberley, a diamond mining town nearly 500 km south and west of Johannesburg. The congregation was a mostly mixed-race ethnicity called “couloured” in South Africa. Like their black countrymen, coloured people suffered oppression under apartheid—South Africa’s system of racial segregation that would remain in place until the early 1990s.

As another student stood up front and spoke about the seminary, Stephen felt overwhelmingly convicted about his country’s culture. He started sobbing. Then he stood and apologized to a congregation he didn’t know at all.

“I just felt compelled to apologize for things that I wasn’t even part of, but things that my participation in the police force might have represented to this community,” he says today. “What the apartheid system represented to this community. The way in which they perceived white men, and me being white there in their midst—what I represented. There were no atrocities that I had to ask forgiveness for. But I was part of the system.

“It was such a cathartic moment for me, just asking these people who didn’t know me for their forgiveness.”

The surprised congregation also stood. Several members said, “We forgive you. We don’t know what we are forgiving you for, but we forgive you.”

The experience changed Stephen profoundly, and it’s one that shapes his approach to his role today as executive director of the Wycliffe Global Alliance. 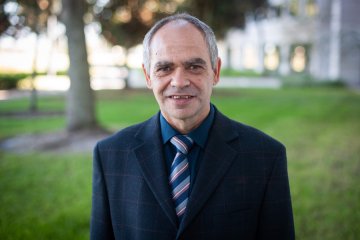 In many language communities, a history of racial, ethnic and cultural tension or even oppression must be confronted before, during and after Bible translation work.

“There are many cases where Bible translation has played a role in healing and understanding,” Stephen says. “But I think Bible translation also has been caught up in social ills in which it probably did not want to get caught up.”

On the African continent in particular, it’s complicated. The more recent the colonial history, the more pain may be associated with how people first received Scripture, he says.

In what is now Botswana, Robert Moffat translated the Tswana Bible more than 150 years ago (Tswana communities live in South Africa as well). Yet, when he saw what else grew from his work, he lamented, “Cursed be the day I started this translation.” The colonial powers used Moffat’s linguistic work to draw up contracts that wrested land ownership from local communities.

That was tremendously conflicting for people receiving the Bible for the first time.

“On the one hand, reading Scripture for themselves, (African people) could appropriate the messages of reconciliation and what that means to them,” Stephen says. “But then, they struggled to come to an understanding—how it didn’t square with the missionary presenting this Bible to them, because of the association with the colonial enterprises that came along with it. 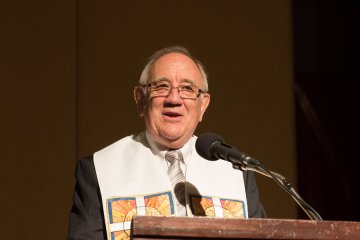 Stephen’s academic promoter for both his master’s and Ph.D. studies also knows a thing or two about mistrust and reconciliation. As apartheid ended in the 1990s, Reformed theologian and pastor Piet Meiring was appointed by President Nelson Mandela to serve on South Africa’s Truth and Reconciliation Commission. The commission provided a forum to bear witness to human rights violations during apartheid. Victims or their families confronted the perpetrators, who often sought and received forgiveness. At a time when the world expected South Africa to descend into bloody civil war or even genocide, grace and reconciliation won the day.

“That was quite an experience,” Piet says, “having the white Afrikaans churches trying to explain why they fell for the apartheid theology and eventually came to their senses and asked for forgiveness for the pain they had inflicted upon others. And on the other side, the magnanimity and the grace of the other churches—often the churches of victims—who reached out and said, ‘If you confess, we accept your confession and we embrace you.’”

Later, Piet served twenty years on the Wycliffe South Africa board of directors, including five years as board chair. He sees numerous intersections between Bible translation and reconciliation—starting, of course, with people accessing and engaging with God’s message of reconciliation.

Both he and Stephen know it isn’t that simple. The way people are treated during the translation process—by nonlocal translators, consultants and funding agencies—plays a huge role in whether they ultimately embrace the translated Scripture. Local agency in the process helps immensely.

‘The church was on both sides’

During his academic research work, Stephen worked in theologian David Bosch’s library, and had access to his personal notes and papers. One day, he found letters from 1988 between South African President P.W. Botha and Archbishop Desmond Tutu. Tutu told Botha that apartheid was, without question, an evil system. Botha responded: “I grew up in an environment where the Lord was served. Where the love of God, his church and his Word was transferred to me, and which I cherish in my heart to this very day. That is why I strive to conduct my personal life and my service as state president according to the principles of the Christian faith.”

“So,” Stephen says, “embedded in that apartheid system, one of the pillars, was the church. And yet in the words of the state president himself is the value of Scripture, instructing him how to live out his function as president. You can understand how the Africans would have perceived those words:  Yes, we value Scripture, but on the other hand, this oppressive system is also valuing and taking its marching orders from the same Scripture. You can just see the dualism in this whole process.”

“The church was on both sides,” Piet says. “The (Dutch Reformed) Afrikaans churches were on the side of the oppressors, even to the point of providing a theological argument for apartheid for many decades. But the vast majority of Christians were English-speaking and black, and of course they were on the other side. So the history of this struggle in South Africa is not only the history of politicians, but of church people, of Christian conviction to stand up against apartheid.”

Both sides, personified by Botha and Tutu, professed love for Christ, the church and the Word of God. But they were at odds about a political system most today would call evil. Stephen considers it a cautionary story.

This means, he adds, that anyone connected with Bible translation must ask hard questions of themselves and their attitudes toward what Tutu used to call “people whose noses look different than mine.” Do I perceive them as part of the same humanity that Christ has created? What is my attitude toward the people I am serving? Do I position myself in a way in which I am perceiving myself as more important and them as less important? Or what about the other people I am working with? How do I view my colleagues?

“This becomes very critical in the message of reconciliation.”

Stephen looks back on his experience at that church in Kimberley as the beginning of a lifelong road of reconciliation with God and with others.

“Before that, I did not see that I was in need of forgiveness, because I did not harbor any hatred against anybody,” he says. “Then all of a sudden you just pick up nuances in your own life, how you treat other people who are different from you—without hating them, without looking down on them. … I realized that maybe there were a number of elements of racism within my own life even though I didn’t even recognize them.”

“So there is a measure of sensitivity that develops in one’s life. You cannot look at people the same again. I can sincerely understand why Christians cannot associate themselves with the evils of the world because they are living good, godly lives. For no second do I blame or try to cast any burden upon Christians. But it is so very possible that we can live such godly lives without even realizing the hurt that we are causing other people because of not realizing the context out of which they are coming, and the way that others perceive us.”

The Lausanne Cape Town Commitment of 2010 includes statements on reconciliation. In part, they say: “We long to see the worldwide Church of Christ, those who have been reconciled to God, living out our reconciliation with one another and committed to the task and struggle of biblical peace-making in the name of Christ.”

It wasn’t lost on anyone that those statements were agreed upon in the same country that had just seen forgiveness and reconciliation play out miraculously.

“The message of the cross is clear,” Stephen says. “Reconciliation is vertical and horizontal. It is vertical in a relationship to Christ coming to the triune God, and horizontal toward one another. In Christ, he brought us all together in a new creation, a new body that he has created.”

Which, he says, points directly to Ephesians 2:14—“For he himself is our peace, who has made the two groups one and has destroyed the barrier, the dividing wall of hostility …”

“The peace he brought was not only for the forgiveness of sins, but to bring peace between humankind, between people of different races, different ethnic communities,” Stephen says. “In the end, we all have a responsibility before God, and a responsibility to the world. This is where we find our marching orders as Christians. This is where mission starts, at the cross of our Lord Jesus Christ. And it is flowing out of that in terms of the ministry of Bible translation that we have a responsibility of reconciliation. We cannot escape that. If I proclaim the Lord Jesus Christ as my Savior, I have become part of this whole ministry.”