Home A Message for All

A Message for All

“I was standing in front of the throne of God, and God unrolled something like a scroll and his finger was writing on it. For a long time he was writing. Then God gave this scroll to me. I put it into a bag – and the Lord said to me, ‘You have to go. This is an important message you have to deliver.’”

This vision marked the start of a remarkable journey which led Lilly Simon to become the first person to produce a children’s Bible in her mother-tongue language of Kalderash Romani.

Today, her book has been read by Roma people in more than 20 countries around the world, and it’s changing lives in profound ways.

A Desire to Hear God Speak 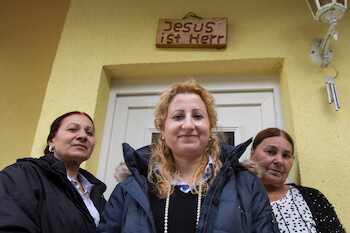 Lilly Simon (center) and her two sisters stand outside their family home in Offenburg, Germany. The sign above them reads “Jesus is Lord” in German.

Lilly grew up in Germany in a Christian family, and regularly went to church with her parents. They had access to Scripture in German, but never had it in their own language –Kalderash Romani. Lilly had a deep desire to hear God speak to her heart. She longed for authenticity, and prayed that God would reveal himself. At the age of 14, after a discussion with her brother, she says, “I felt the love of God. I felt that something was coming into my life, and it was Jesus.”

Several years later, when it came to making choices about her academic future, Lilly said, “God was leading me to a new level of our relationship, a new phase.” She opted to study theology and, against all the cultural norms in her community, Lilly became a pastor.

This bold, faithful young woman felt God had a special job for her. Lilly prayed, “Lord, what can I do?” And that’s when she received vision number one… “I saw a Bible, a gigantic one filling the room,” said Lilly. “I cannot explain it. The book was closed and then it started opening. The pages kept turning and they were almost alive, with a light coming out of them.” 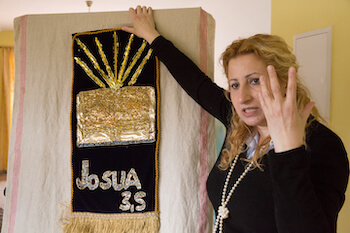 After her visions Lilly created a banner with a scripture reference on it, using this passage of scripture to remind her vision: “…’Consecrate yourselves, for tomorrow the LORD will do amazing things among you.'” (Joshua 3:5, NIV).

This, Lilly believes, was God telling her that his Word is alive. In the meantime, she had started reading to her nieces and nephews from an English children’s Bible, translating as she went. A thought began to seed in Lilly’s mind: why not in Kalderash Romani Kalderash? Why not have the Bible in her own language?

Then vision number two occurred – of herself standing at God’s throne and receiving the scroll – and Lilly became convinced of her specific calling and ministry. What followed was a series of remarkable meetings and answers to prayer. “People told me I was crazy,” says Lilly, looking back wryly. “But if it is a God thing, He will provide everything.”

In early 2014, Lilly went to Mission-Net Congress, a meeting which happens once every two years to equip and inspire Christian young adults across Europe. “I didn’t want to go that day,” said Lilly. “I was late, and when I went in, there were only 10 minutes left of the morning service. But when I entered, I felt the power of God in that room. It touched my heart.”
After the service Lilly browsed the displays set up by various ministries, praying intently. “I said to the Lord, ‘I don’t know why I’m here, but I believe there is a reason behind it.’ There were lots of mission stands.”

Lilly went from stand to stand, asking the Lord, “To whom should I talk? Where should I go?” 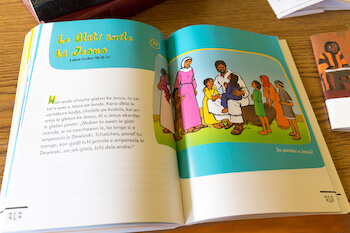 The story of Jesus and the little children in the Kalderash Romani children’s Bible.

Then she spotted a small exhibition with pictures on the wall. They were drawings for children. “These are the pictures for my children’s Bible!” Lilly thought.

As she explained her vision for a children’s Bible in Kalderash Romani, the woman at the stand began to weep. It turned out that before Lilly had arrived at the conference, all 3,000 young people there had listened to Angelika Marsch, the director of Wycliffe Germany at that time, share about the Roma people. Then all of the participants prayed that God would send workers into the harvest… that the Lord would provide more Bible translators for the Roma people. 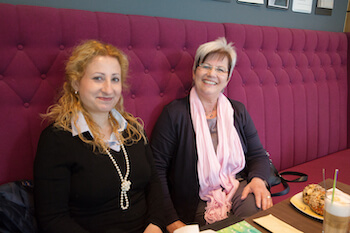 Lilly was ushered to the Wycliffe booth, where she met Angelika and said: “You prayed for the Roma, for a Bible translator – and here I am” There were tears of joy, and some deep, heartfelt discussions.  Lilly came away with a plan to begin translation work.

The project got underway with virtually no funding. But Lilly said, “God was true to his promise and gave everything we needed and asked for.” The woman from the Mission-Net exhibition provided the pictures, Angelika helped her raise funds and provided contacts with potential partners. 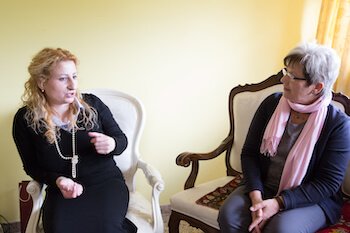 Then, Lilly surveyed children about their favourite passages and characters and began translating. With her team, Lilly translated 122 Bible stories from the Old and New Testaments into Kalderash Romani. Later, she received help and advice from other people experienced in Roma Bible translation.

In December 2015, 6,400 children’s Bibles were printed. At the next Mission-Net conference, the book was dedicated – and 450 copies were distributed to missionaries from across Europe. Word spread. Children and adults loved it. Church leaders began asking for copies. One was even smuggled into a jail in Holland. 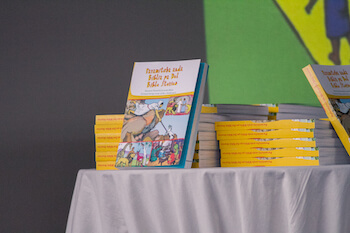 Lilly began to hear incredible stories of the book transforming people’s lives. One story she heard was about a Roma mother whose little boy had speech problems.  His mother said that she read to him from the children’s Bible, and the following morning, he started to talk, accurately speaking words he had never uttered before. “Who taught you to speak like that?” his baffled mother asked. “God himself,” said the little boy.

The ministry has not been without challenges, however. Close to home, the children’s Bible can be treated with hesitation, even suspicion. “In my culture, women don’t preach,” Lilly explains – so people are cautious about her influence. 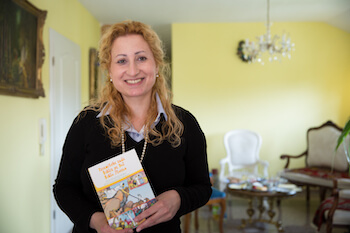 But, this has not deterred Lilly.  “The very fact that God gave his Son to die for us…” said Lilly. “We get everything out of that. It gives us so much strength and power. It allows us to live.”

Lilly’s hope now is to see the book distributed widely in the UK, Chile and Russia – all places with large Kalderash Roma communities. She also aims to do audio recording of more of the stories. To start with, 30 stories were produced on a CD accompanying the children’s Bible, to cater to the many Roma people who prefer oral communication. The team have now recorded 30 more stories, but they’re still not yet half way through all of the stories in the children’s Bible. 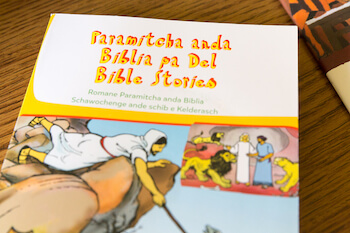 This is a children’s Bible translated into Kelderasch Rroma.

The goal is to also publish the children’s Bible in the Cyrillic alphabet, and possibly produced a comic book version. Lilly, ever guided by prayer and Scripture, said, “I’m curious about where the Lord will lead us, but I am sure He will open up a way.”

She added, “As long as we’re living in the light, as long as we have time, we must use the opportunities God has given us. The Gospel has to reach people. We don’t know how things will develop, whether borders will close. As long as we can act, we must.”